Peter Young was born in Guildford. He graduated from Oxford with a 2.1 degree in maths. He trained as an actuary. He married his second wife in 1991. They had two sons.

In 1992 he joined Morgan Grenfell Asset Management in London, which had been acquired by Deutsche Bank. He earned £300,000 a year managing the £1.2 billion European Growth Fund, and was making illegal gambles with his investors’ money including investing in companies that he himself owned. In early 1996 he gave a lecture at the Royal Albert Hall on some of the secrets of his success, and was named investment manager of the year.

In September 1996, Morgan Grenfell suspended dealings in the fund. Young was fired for gross misconduct. The Serious Fraud Office (SFO) investigated. Five more employees were dismissed, and a compensation system of £180m was set up for 90,000 investors, and Deutsche Bank had to pump £100m into the fund to shore it up. In April 1997 the city regulator imposed a £3 million fine.

In 1998, Young was charged with conspiracy to defraud, conspiracy to create misleading information and three counts of dishonestly concealing misleading facts. Young, now answering to Elizabeth, appeared in court as a woman. She also attempted a self-castration after internal voices told her to do so. The SFO challenged the assertion of her lawyers that she was unfit to stand trial in that no mental health problems had been noticed before the fraud was discovered. In 2000 a first jury was dismissed unable to reach a decision, but the second jury found that she she had schizophrenia, and that the 1964 Insanity Act pertained. Peter’s wife sued for divorce.  Deutsche Bank discontinued the use of the Morgan Grenfell name in 1999. 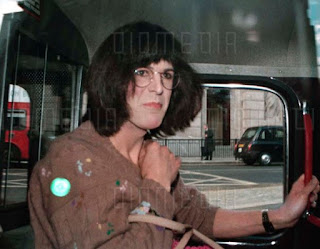 A second defendant was spared trial because he had terminal leukaemia; a third had charges thrown out on the directions of the judge; the fourth was found not guilty after a £10m trial, and immediately flew back to his native Norway.

For some reason the Wikipedia article on Morgan, Grenfell & Co.  says nothing at all about the Peter Young scandal.

If you are schizoprenic the gatekeepers won't approve you for surgery.  They regard that as co-morbidity.    If you google schiziophrenia and transsexual there are a fair number of returns, but nobody seems to have tied the bits together.
Time: 12:18