Tilke was born in Breslau which was then in Prussia (now in Poland and known as Wroclaw). He studied art at the Preußische Akademie der Künste in Berlin, and specialised in costumes. He enjoyed the fact that female models were not used at the Akademie and students dressed as female to model for each other; he also started going to fancy-dress balls in female dress.

In 1890 he gave his virginity to Arab men while on holiday in the near East. In 1901 Tilke was part of the Cabaret zum hungrigen Pegasus in the back room of the 'Dalbelli' pub on Potsdamer Brücker. He was most comfortable in the company of transvestites and loved to put on women's clothes.

He was married twice to women.  His first divorce was in 1902.  He remarried in 1906, and was divorced again in 1912.  He was interviewed - possibly in 1909 - by Magnus Hirschfeld (he is case VI in Die Transvestiten). He was mainly painting works of historical costumes, which gained him a reputation among the authorities and in high society. In 1911, at the Lipperheide Costume Library of the Kunstgewerbemuseum Berlin, Tilke had an exhibition of his first collection, which was so well received that it was purchased for the library with state monies. 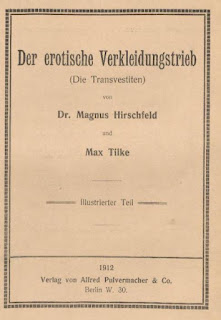 He had also been working with Hirschfeld and in 1912 they published Der erotische Verkleidungstrieb, a book of illustrations to complement Die Transvestiten which had been published two years earlier.  1912 was also the year of his second divorce.

In 1913 he took a position at the "Deutsche BIOSCOP GmbH Filmgesellschaft", Neubabelsberg/Berlin, where he was responsible for the costume design for their films. In the same year Tilke was commissioned by the Russian Tsar to work at the Caucasus Museum in Tbilisi to paint the costumes in the Museum's collections as well as to undertake an ethnological expedition to enlarge the collection. However this was interrupted by the outbreak of war in August 1914.

Tilke returned to Germany, taking some of his paintings with him. During the war, Tilke worked for the publishing union, Deutsche Verlag Union, in Stuttgart, painting works about the war, but he continued his interest in ethnic costumes and published several works on the topic. In the 1920s Tilke was known as a book illustrator and decorative painter.

-------------------------
Rainer Herrn's Schnittmuster des  Geschlechts: Transvestitismus und Transsexualität in der frühen Sexualwissenschaft, 2005, page 57-8:
"As already mentioned, Hirschfeld had described cross-dressing as a characteristic typically associated with homosexuals around 1900, and in 1906 he distinguished for the first time between homosexual and heterosexual cross-dressers. And although there were enough homosexual men in the environment of the Scientific-Humanitarian Committee who presented themselves in women's clothes - not only at balls - we may mention only Hermann von Teschenberg and Willibald von Sadler-Grün. Hirschfeld chose for his casuistry of seventeen cases exclusively those who neither exhibited same-sex inclinations nor had corresponding experience. At the same time, he also knew other homosexual transvestites personally, as can be seen in Volume II of his Sexual Pathology. There, for example, he portrays two such cases that had been "known to him by special doctors" for 18 and 15 years respectively - i.e. already at the time when he wrote Die Transvestiten." (DeepL translation).
Therefore Max Tilke is notable in being the only person who was not exclusively gynephilic to be included in Hirshfeld's case studies in Die Transvestiten.  Both his marriages were short-lived and he seems to be bisexual.
Time: 14:14