Heinrich Habitz from Ludwigshafen in Rheinland-Pfalz, across the river from Mannheim, was raised by the grandparents, and spent a year in a correctional home for being difficult to raise. Early employment in office work and as a messenger boy did not work out. She was then a circus dancer.

Habitz obtained a Transvestitenschein, a permit to dress female, but was convicted in 1924 under her male name, and sentenced to six weeks for ‘unnatural’ and ‘commercial fornication’, but the sentence was remitted. In 1929 the Mannheim district court gave her a two month jail sentence for ‘unnatural sex acts’ under §175. In November that year Habitz left the family home for good and moved first to Berlin and then to Hamburg. She renamed herself Liddy Bacroff, and did some performance work. 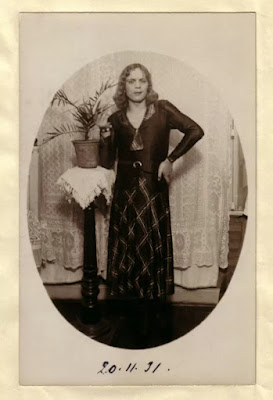 In 1930 in Hamburg, Liddy was sentenced to two months for having stolen clothing from a female roommate, and then a month for trespass. In 1931 she was sentenced to four months for ‘unnatural sex acts’ under §175. While in prison she wrote two pamphlets about her life: Freiheit! (Die Tragödie einer homosexuellen Liebe) (Freedom! :The Tragedy of a Homosexual Love) and Ein Erlebnis als Transvestit. Das Abenteuer einer Nacht in der Transvestitenbar Adlon! ( An experience as a transvestite. The adventure of a night in the transvestite bar Adlon! ).

In 1935 the Nazi government amended Paragraph 175. Under a new section 175a, the law introduced harsher penalties for male prostitution, sex with a man younger than 21, or sex with a student or employee. The change in the law was not publicized for fear of spreading knowledge of homosexuality. Most Germans were unaware the law had changed and many of those arrested under the new law had no knowledge they were committing a crime. The law was also applied retroactively.

Later that year a sailor had gone to the police and reported a prostitute for theft. Police investigations led to Liddy. She was arrested in January 1936, and made the following statement: “I admit to the theft of 20 ReichMarks in the Herrenweide. Its my opinion that the man did not know that I am also of the male sex. Rather he will have assumed that intercourse was with a woman. Since my release I have lived from unnatural sex acts. I did not have stable employment and I also didn’t receive any help from public funds. I met my punters in St. Pauli. I usually received 2 to 3 RM for each job. On average this meant my daily earnings were around ten Reichsmarks. I lived in different places, usually only for a day or two. I also went there with my punters. I don’t know the names and addresses of the people any more.”

The assistant police investigator wrote in his report: “On the homosexual disposition of Habitz it should be said that the seeds of his abnormality can already be observed in his youngest years. He preferred to play with dolls, as his behaviour matched just that of a girl. Lipstick was indispensable to him in his ‘vanity’. At the age of 16 his homosexual nature was awakened. His emotional life can be compared to that of a woman. He never had the urge to live his sexual life as a man. The description of ‘Mann-Weib’ [‘man-woman’] aptly characterises him.”

Libby was sentenced to 2 years in prison and 3 years forfeiture of honour (loss of civil rights) for commercial unnatural fornication and theft, and served her time in the Bremen-Oslebshausen prison, where a Nazi SA official had been installed as director.

Liddy was released in January 1938, and changed address without registering with the police. This led to a police search for her. On 25 March she was denounced by an onlooker while sitting in a bar with a customer. The man insisted that he thought that he was with a woman. In the police report Liddy is quoted:

“I was given permission for it by the police authorities. So I could move about in women’s clothes. But at the same time I was watched by the vice squad. […] My passion for men ultimately drove me to prostitution. I find sexual satisfaction, where there is love for my partner, through anal intercourse. […] Up to today I have earned a living through prostitution. […] In the period after serving my sentence until my arrest, i.e. from 15.1.38 to 25.3.38, in these 9 weeks I had around 3 men per day. On average they paid me 3 RM. Sometimes I would even get as much as 10 RM from a punter. In most cases I met my gentlemen on the street (St. Georg), rarely in a bar. Sometimes I would approach the men, sometimes the other way around. After we had agreed on the price we would go to the Kucharsky guesthouse, on the corner of Hansaplatz and Bremerreihe. The guesthouse owner knew that I was a Mannweib.’”

In August Liddy was sentenced to three years in prison A few months into the sentence, Liddy applied for "voluntary castration" in order to be cured of the "morbid passion that led me down the path to prostitution". She was forensically examined by medical councillor Wilhelm Reuss who described her as an incorrigible "transvestite", "feminine, infantilistic, eunuchoid in voice", a "passive pederast" who was to be considered a "dangerous habitual criminal" due to the "now dangerous and permanently fixed form of his sexual perversion". Reuss saw little prospect of "improvement" and recommended subsequent preventive detention.

In 1943 Liddy Barcroft complete her prison sentence, again in the Bremen-Oslebshausen prison. She was then transferred to the Mauthausen concentration camp where she was murdered.