​Lorétan was raised in Thun, south of Bern. She was taking black-market hormones from the age of 13. Her elder sister had been raped at age 13, and afterwards turned to drugs and died at a young age.


After high school, Lorétan trained as a model. At age 20 she took the name Éve-Claudine and Coco as a professional name. She met 32-year-old photographer Olivier Fatton in a sauna in Bern in November 1989, and they instantly fell in love.  She asked him to document her transition.

Her surgery was further video-documented by film-maker Paul Riniker. However there was an error, and more  surgery was required. The day her friends took her home from the hospital, she did cocaine to deal with the pain, and also insisted on performing that night. On stage she tore out her IV, howled and bled.

Riniker’s film Traum Frau Coco was shown on Swiss television in 1991 and watched by over 660,000 on the first broadcast. This made Coco famous in Switzerland, and sporadically she was in the news over the next few years, but she had to work as a housekeeper at a mental hospital in order make a living. 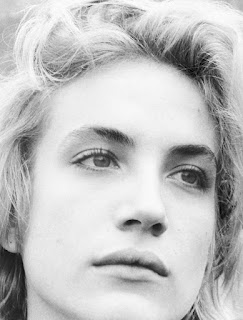 She also suffered from osteoporosis and depression. Doctors prescribed morphine, but that led to addiction.  She did model for the Bernese fashion designer Marianne Alvoni, and for a while was working at a sex salon in Thun, but was too well known.

In 1997 the manuscript of her autobiography was stolen. She made several suicide attempts, and so died at age 29.

In 2018, Coco’s life was made into a musical, Ein Transgendermusical by author Alexander Seibt and composer Markus Schönholzer. A male was cast for pre-transition and a female for her later years.

In 2019, Fatton published his photographs of Coco.