Beverly-Barbara*, from the Los Angeles area, was definitely a transkid expressing girls’ interest and dressing as a girl from an early age. Her parents hoped that she would grow out of it.

At age 15 she found work as a cocktail waitress, and saved up enough money to go and see Harry Benjamin. She claimed to be 18, although only 16, and Benjamin prescribed female hormones. Beverly-Barbara followed up with breast implants and electrolysis. Her voice had not changed much at puberty.

She found a boy-friend and in early 1967 they were married in Reno. She was able to do presenting her drivers license only. Beverly-Barbara was by then working as a receptionist at a prominent restaurant, but still not able to afford completion surgery. Benjamin suggested that she get in touch with Richard Green who, after two years with Benjamin in New York and a year in London with John Randell, had returned to the University of California Los Angeles Gender Identity Research Clinic (UCLA GIRC).

When Beverly-Barbara approached Green, he initially failed to understand why she was doing so.

The GIRC had been active since 1962 but had not actually provided transgender surgery to any one, and Green thought that it was time to do so. Robert Stoller, the head of the GIRC was cautious about permitting such surgery, but was open to it being used as a research technique.


“Patient selection was crucial. It should be limited to those males who had been very feminine in childhood, had never lived acceptably in a masculine role, and who had not derived pleasure from their penis. He termed these ‘true transsexuals’.” (Green, 2010:1459).

Green enquired about the likelihood of being charged with mayhem. The University of California legal counsel in Berkeley quickly replied that such was a possibility, but that the University would pay the legal bill. 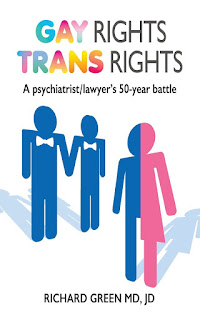 Green presented Beverly-Barbara to the GIRC at a Saturday morning conference in November 1968. Stoller gave a qualified approval. A second opinion was obtained from UCLA psychiatrist Larry Newman, and urologist Willard Goodwin (Elmer Belt's ++nephew who had argued against the continuation of transgender surgery by his uncle in 1954) agreed to do the operation.

All went well, and Beverly-Barbara co-operated in follow-up interviews. Then she disappeared into private life.
---------

Beverly-Barbara will now be 75 years old.

Other clinics refused to start the clock on the real-life test until after they had interviewed the patient – as Holly Woodlawn had found when she approached Johns Hopkins in 1966.


Of course Beverly-Barbara is very similar to Agnes, who had been approved for surgery with Elmer Belt by Stoller 10 years earlier. There has been a lot of commentary about Agnes, but very little about Beverly-Barbara.
Time: 11:15