Michelle was born in Salinas in the Canelones Department of Uruguay. She transitioned at age 15 with the support of her mother.

Accepted at the Universidad de la República in Montevideo, she was the first out-trans person to attend university in Uruguay. She suffered transphobic harassment and a professor who specialized in human rights refused to grade her work. She also set a precedent in changing her legal gender status. She graduated and became the first out trans lawyer in the country in 2010.

That year her mother died. Michelle joined Ovejas Negras (Black Sheep), an LGBT rights organization. There she made a major contribution to the draft bill for equal marriage legislation. The bill was presented to congress in 2011, initially passed in 2012, and finally approved in 2013.

In 2012 Michelle published a book on the difficulties that some minorities, including trans and gay, have in achieving human rights.

She joined the Communist Party (PCU) which is part of the ruling coalition Frenta Amplio (Broad Front) and was elected an alternate senator (with limited voting rights).


In October 2017, Senator Márcos Carámbula resigned and Suárez became a full Senator. She said that she would introduce a bill that would allow trans people to legally change their identity without a court order. The measure would also require Uruguay to set aside 1 percent of government jobs for trans people and create a pension to compensate those who suffered persecution during the country’s military dictatorship, 1973-1985, because of their gender identity. 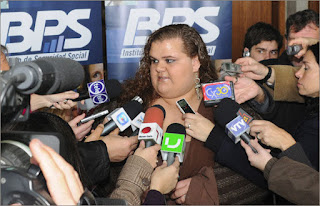 However in December, two months later, she was found guilty in a case of an estranged father’s parental rights having been cancelled in a document with the wrong signatures. Suárez resigned her seat.