“The story’s told/ With facts and lies”. Leonard Cohen.

A new series of untruths, canards, lies and misinformation that are repeated with regard to trans history.

We know how this canard started.


“Sylvia Rivera had been invited to Marsha P. Johnson’s party on the night of June 27, but she decided not to go. … No, she was not going to Marsha’s party. She would stay home. … But then the phone rang and her buddy Tammy Novak – who sounded more stoned than usual – insisted that Sylvia and Gary join her later that night at Stonewall. Sylvia hesitated. If she was going out at all … she would go to Washington Square [bar]. She had never been crazy about Stonewall. …. But Tammy absolutely refused to take no for an answer and so Sylvia, moaning theatrically, gave in. …. Rumor had it that Marsha Johnson, disgusted at the no-shows for her party, was also headed downtown to Stonewall, determined to dance somewhere. Sylvia expansively decided that she did like Stonewall after all …. When the cops came barrelling through the front door.”


This altered somewhat in the retelling.

Here is part of the IMDB summary of the plot of the recent film, Happy Birthday, Marsha! :


“It's a hot summer day in June, 1969. Marsha throws herself a birthday party and dreams of performing at a club in town, but no one shows up. Sylvia, Marsha's best friend, distraught from an unsuccessful introduction between her lover and her family, gets so stoned she forgets about the party. After encountering a series of micro-aggressions from street harassment to tense encounters with the police that day, Marsha and Sylvia eventually meet at the Stonewall Inn to finally celebrate Marsha's birth. When the police arrive to raid the bar, Marsha and Sylvia are the first to fight back.”


Happy Birthday, Marsha! is of course a lot more trans positive than Roland Emmerich’s Stonewall that came out a few month’s earlier.

However, there are two problems:

A) Was Sylvia Rivera even at Stonewall on the first night of the riots? David Carter in his Stonewall: The Riots That Sparked The Gay Revolution, 2004, does not even mention Sylvia. Very annoyingly he does not give any reason in the book for Sylvia being missing. However he was interviewed by Gay.Today on this very question and answered:


"Yes, I am afraid that I could only conclude that Sylvia's account of her being there on the first night was a fabrication. Randy Wicker told me that Marsha P. Johnson, his roommate, told him that Sylvia was not at the Stonewall Inn at the outbreak of the riots as she had fallen asleep in Bryant Park after taking heroin. (Marsha had gone up to Bryant Park, found her asleep, and woke her up to tell her about the riots.) Playwright and early gay activist Doric Wilson also independently told me that Marsha Johnson had told him that Sylvia was not at the Stonewall Riots.”

B) The consensus is that Marsha Johnson’s birthday was 24 August 1945. It could well be that she proposed a party on 27 June, but it was not a birthday party!


On the other hand, some sites seem to have worked backwards and assumed Marsha’s birthday from the date of the Stonewall riot (they also for some reason add one year to her age):

Transgender Equality says: “Disappointed that no one had shown up for a party to celebrate her 25th
birthday, Marsha P. Johnson headed to the Stonewall Inn on the evening of June 27, 1969”.

Femmes Fatales at Penn State University says: “Marsha P. Johnson was celebrating her 25th birthday at Stonewall during the early morning hours of June 28th, 1969 when the police began a raid of Stonewall”. 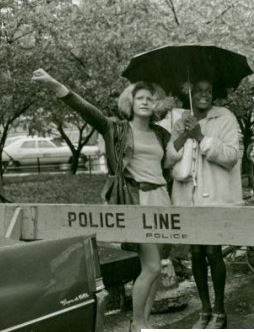