Part I: sporting champion and war service
Part II: The Well of Loneliness

May Lowther, her elder sister Aimée (1869-1935) and elder brother Claude (1870-1929) were scions of the Lowther dynasty, which features the Earls of Lonsdale (see also, more) and many Conservative Members of Parliament.

May's father, William Francis Lowther (1841-1908), was a naval office who rose to the rank of Commander. When his father, William Lowther, the 2nd Earl of Lonsdale, died in 1872, he retired and lived on an inherited trust fund. He did not inherit the title as his parents, his mother being the opera singer Emilia Cresotti, had never married. The 2nd Earl also had two illegitimate daughters with different mothers. May's mother was Louise Beatrice de Fonblangue from Toronto (? -1922).

May was educated at Le Pensionnat Les Ruches, a private boarding school at Avon, near Fontainbleau in France. Natalie Barney and her sister also attended the same school. Lowther became fluent in French and gained a baccalaureate in sciences. 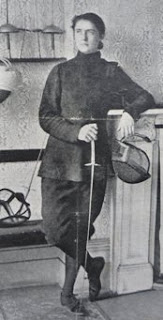 Using the name Toupie, she took up fencing at age 15. She preferred the Italian rather than the French style, and declined to fence in a skirt on grounds of practicality. She fenced with both men and
women.

In 1898 at a widely publicised fencing competition and display held at The Military Gymnasium of the Army Camp in Aldershot, Toupie vanquished not only her lady opponents but also the army’s Sergeant instructor. At a display in Paris 1902, billed as “The Lady Champions of England and France,” she opposed (and worsted) the famous Mme Gabriele before a crowded salon. In 1903 she engaged and held her own against the Maître, or Prof. Yvon at the Civil Engineers Hall in Paris.

She was an accomplished singer and composer. She set poems by Oscar Wilde and Alfred Tennyson to music, and her music was performed at the Wigmore Hall in London. The Waifs and Strays Society held a fancy Grand Benefit on 3 June 1899 with royalty in attendance. The program included "Incidental music by Miss Toupie Lowther".

At this time, brother Claude was with the British Army in the Boer War. He became a Conservative MP in 1900.

Toupie was also a keen tennis player and participated in championship games, especially those held at Homburg 1896-1901, and at Wimbledon where she reached the singles semi-final in 1903. She did win the British Covered Championships in 1900  and then again in 1902 and 1903. She also won the German Championships, 1901, the Monte Carlo Championships, 1903, the Homburg Cup, 1904, the Cannes Championships, 1906 and the Championships of the South of France, 1906. She was large, renowned for her lobs and said to have a man's stroke and a man's strength.

She was one of the first women to own a motorbike and lift weights.

In 1917, at age 43, with Norah Desmond Hackett, Toupie sent a petition to General Petain at the Grand Quartier General to organise 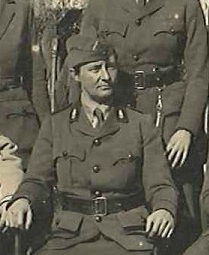 This being approved the Hackett-Lowther Unit with 20 donated vehicles was incorporated into the French Army with permission to do front-line work. The drivers and the canteen women were ranked as private soldiers and paid 5 sous a day; Toupie Lowther and Norah Hackett as sous Lieutenants at 10 sous a day with one stripe on the sleeve. The drivers were all women, and some had already done similar work in Serbia, Romania, Greece and Russia.

They were heavily involved in the battles at Compiègne, in June 1918. They were then incorporated into the 1st Army for the final advance into Germany. The Unit was twice mentioned in dispatches.

Several members of the unit, including Lowther, were awarded the Croix de Guerre. The Unit was disbanded 19 March 1919.

After Mabel's death, John Radclyffe Hall and Mabel's cousin Una Toubridge (1887-1963) became a couple. Again Toupie and her brother Claude were friends of John and Una, who were taken with Toupie's war record. In 1920, Una said that she thought that Toupie was a hermaphrodite. In 1922 in Brighton with Una Toubridge and Radclyffe Hall she bought an “Overland Tourer” and taught them to drive.  They referred to her as 'Brother'.

In the 1920s Toupie ran a lesbian salon, and writers such as Radclyffe Hall, Ida Wylie, May Sinclair and Vere Hutchinson (popular at the time) attended. Toupie loved to tell how, while motoring, she was stopped at the Franco-Italian border for masquerading as a man. On the return journey she wore a skirt and was arrested for masquerading as a woman.

In 1926, Toupie Lowther was elected a member of the French Academie d’Armes, the only woman to that date to be so.

There is no mention that Toupie ever met either Joe Carstairs or Violette Morris.  With their shared interests in sports and motor vehicles and experience with ambulance uits in the war, they would have had a lot in common.

There are Wikipedia pages for both Toupie and Claude.   Claude's does not mention Toupie at all.   Toupie's - mainly about her as a tennis star, with a brief afterword about the ambulance unit, and no mention of The Well of Loneliness - returns the favour.
Time: 09:28