Of Polish descent, Power was born and raised in Chicago. Power's father, a sailor taught the child, who already thought of himself as a boy, carpentry, baseball, bowling, billiards and poker. He played sports with his elder brother's friends without being outed as a girl.

At age 6 he witnessed a women pedestrian killed in a car accident. His mother started abusing him, attacking her husband and mutilating herself. At 13 Power was obliged to wear a dress for confirmation, and after that for church and the Catholic all-girls school.

Power became a street kid who did alcohol and other drugs. By 16 he passed well enough to get into leather bars and drag-show clubs. He marched for civil rights and ran from the police riot at the 1968 Democratic National Convention. He was part of the Workers World Party.

He went to a therapist and fell in love with her, but she was homophobic, and rejected him with prescriptions of antidepressants and antipsychotics. She urged Power's mother to have him committed. He was diagnosed as having a "narcissistic personality disturbance with anxiety and recurring panic attacks". He managed to avoid taking the compulsory pills, and started talking about a boyfriend. Six weeks after this he was released. He became an activist in the anti-psychiatry movement.

In 1972 he found a butch lesbian psychologist who told him that he was a butch, that he did not need therapy and should get involved at the Lesbian Feminist Center. There he found support to get off drugs, lose the 50 pounds he had gained from the prescription drugs, and to eat vegetarian. He was grateful but did not really think that he fitted in. The Chicago Lesbian Feminist Center housed the New Alexandria Lesbian Library (NALL) and Power became a volunteer there. He also had his first lovers and completed an MA in comparative literature and sociocultural processes, and got a job as a proof reader with a magazine publisher.

In 1977 the Chicago Lesbian Feminist Center closed and Power rescued the books and magazines from the NALL. He broke with his bio-family in 1979. They denied all the abuse, and Power had not only made it up, he was also queer. He, his lover, and the NALL collection moved to Huntington, and later Northampton, Massachusetts. He got a job in an ad agency in Hartford. Connecticut.

Lovers came and went. Bet drank heavily in "dyke, gay and trannie bars". In 1982 he tried to stop drinking. In 1983 he kicked in the bedroom window of an ex-lover, and was briefly in jail. He went to an alcoholism counselor, and also did a past-life regression with a psychic counselor. He was told that he had always, in every past life been a man, and in his previous life had been a Japanese scientist who was executed for treason after helping the US develop the atom bomb. He admitted his alcoholism and started going to Alcoholics Anonymous. He also came out both as trans and as into Sado-Masochism.

In 1986 the NALL received a letter from Louis Sullivan containing his pioneering Information for the Female-to-Male Crossdresser and Transsexual. Bet finished reading it in two hours. It gave him a vocabulary to describe himself, and now he knew that he was not the only FTM transsexual. He contacted Louis, and a few weeks later flew to San Francisco to meet him. They wrote and phoned each other frequently until Lou's early death in 1991. By then Bet had met his wife and his job was going well, and he did not feel that he could move to San Francisco to continue Lou's work.

He was no longer involved in the lesbian community. They were uncomfortable with his maleness, and also with the fact that he directed a monthly support group for lesbian, bi and trans into S/M. He decided that the NALL collection was not just a lesbian collection, and renamed it as the Sexual Minorities Archives.

He visited a gender counselor to decide if he wanted to medically transition, as his wife was 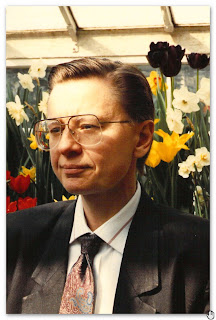 encouraging him to do. Despite knowing only one FTM crossdresser in all of New England, in 1992 he founded, on his forty-second birthday, the East Coast Female-to-Male Group (ECFTMG). It grew slowly but eventually was able to split into separate groups in the major New England cities.

He settled as being non-hormonal and non-operative. Despite some employment discrimination, he has managed to achieve creative director—vice president positions in advertising and marketing. His wife left him for a cis man in 1995.

In 2007 Power was diagnosed with granulomatosis polyangiitis, and now needs surgery every six months to keep breathing. He has not worked since. He is living on disability.

The house that contains the Sexual Minorities Archives is rented, and the owner wishes to sell. Power does not have the money to buy it, but has organized a fundraising campaign.

He is also contemplating a legal name change to Ben.
Facebook     GoFundMe