Ross was raised in a poor francophone family on the south shore of Montréal with lots of cats and dogs, an illiterate but resourceful father in construction work and a Métis mother.


"In the mid '80s, when I was about 16 years old, I watched a TV documentary about fur that included footage of animals caught in snares and leg-hold traps. It changed my life forever. I was so traumatized by what I witnessed that the next day I ran to an anti-fur protest. That's when I met a whole bunch of animal rights activists. I had lots of questions; they had good answers and by 6pm that same night, I had stopped eating meat, stopped wearing leather, and was eager to learn and do a whole lot more."

She settled in Toronto, and made a living as a sex worker.


"...from the early to mid-1990s, there were a bunch of us who had visions of transsexual and transgender spaces – of a parallel trans culture – operating independently of the queer community. … I was hoping that we, as a community, could develop a sense of ourselves that wouldn't be narrowly framed through a queer lens or bogged down in lesbian cultural references. … But unfortunately, this has been a complete failure. Those trans cultural spaces we attempted to create throughout the 1990s have all either disappeared or been absorbed by the lesbian-transgender community."

"But my main request is for transgender activists to stop their sinister appropriation of the abuse and violence that transsexual and transvestite prostitutes endure on every continent. … Trans activists use their deaths as fuel in their crusade for 'transgender rights'. Their campaigns have everything to do with supporting their own political agendas … but absolutely nothing to do with improving the the working conditions or lives of transsexual and transgender prostitutes. The most shameful of this type of political appropriation is the 'Transgender Day of Remembrance'."

From 1993-5 Mirha-Soleil worked with Xanthra Mackay to publish GenderTrash, a political and arts magazine for trans people. From 1995 and for five years, she conducted educational workshops for Toronto social service and health care agencies, and served as a consultant for researchers into trans experience.

In 1996 and for four years she hosted a weekly animal rights radio show on CUIT FM, and was also involved in other radio shows on topics such as lesbian sexuality and disability, AIDS, and transsexuals and immigration.

In 1997 she took up with and became the life partner of film-maker and animal-rights activist, Mark Karbusicky.

Also that year and for three years she, Mark, Xanthra and others ran Counting Past 2, a trans arts Meal-Trans, which included a weekly vegan meal drop-in. She was appalled when, after she left, Meal-Trans started serving meat. 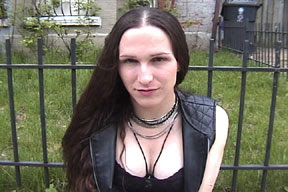 Mirha-Soleil has worked to raise consciousness of animals’ rights in the queer communities, and of prostitutes' rights in the animal rights community.

In 2000 Mirha-Soleil and Mark made a film G-SprOuT (not in IMDB) about love between vegans contrasted with factory farming which has been shown at over 25 queer and other film festivals.

Mirha-Soleil was Grand Marshall of the 2001 Toronto Pride Parade, and was able to place animal liberation activists at the front of the parade.

In 2001 Mirha-Soleil developed her performance piece, Yapping Out Loud: Contagious Thought from an Unrepentant Whore, which drew parallels between animal rights and prostitutes' rights. Later it was presented at the first Transgender Theater Festival in New York.

Mark unexpectedly committed suicide in 2007, and was later memorialised in a documentary by Mike Hoolboom.