(S/he and hir are Riki's preferred pronouns.)


Wilchins grew up in Cincinnati, his father a surgeon, and transitioned to Riki Anne in the late 1970s. S/he did a bachelors degree in Psychology & Communication at Cleveland State University in 1980 where s/he also attended the gender clinic. Hir transition resulted in a breakup with hir girlfriend of seven years. Wilchins later did a masters in Clinical Psychology at the New School for Social Research 1981-94.

In 1981 s/he moved to New York where s/he found work on Wall Street doing computer consulting in banking and brokerage despite being openly transsexual.

S/he approached lesbian archivist, Joan Nestle, asking to be included in the archive, but fearing rejection, and they became friends.

Wilchins was an early supporter of Nancy Burkholder after she was ejected from the Michigan Womyn's Music Festival (MWMF) in 1991. Wilchins was one of the founders of Camp Trans across the road from MWMF from 1994. Wilchins argued strongly that pre-op and non-op should be included in MWMF as much as post-op women. Also in 1994 Wilchins and Denise Norris co-founded Transexual Menace to follow on from Transgender Nation. Later that year, after the murder of Brandon Teena, Wilchins organized a demonstration against New York's Village Voice which had printed an article by Donna Minkowitz on the murder which used only female pronouns for Teena. Later still Wilchins confronted Janice Raymond at the New York bookstore Judith's Room:


"You say we want to 'pass' as women. Well, I don't pass. I wear this Transexual Menace logo every place that I go. Between the two of us, only you pass as a woman. If, as de Beauvoir held, 'One is not born a woman, but becomes one,' if femininity is an invention of men foisted on women, if feminine behavior is a learned cultural performance of hair, clothing, voice, gesture, and stance so one is perceived as a female, then by presenting yourself as a woman it is you who have been co-opted into traditional sex roles, you who serve their institutions, and you who are performing here."

In 1995 Wilchins worked with Phyllis Frye and Karen Kerin on National Gender Lobby Day, a largely successful attempt to lobby every member of the US Government. Riding the excitement from the lobbying effort, Riki gave a rousing speech at that year's Be-all convention in Chicago on the need for a transgender organization to press for political change. In 1996 representatives from most US transgender organizations (but not Phyllis Frye after Wilchins took over the leadership of Lobby Day) met to charter the new organization GenderPAC. The paperwork was signed and Wilchins was named Executive Director.

A split quickly developed between those who wanted to keep the organization transgender specific and those who followed Wilchin's lead in addressing the gender expression of everybody. Policy Advisor JoAnn Roberts and President Angela Gardner resigned over this issue. That same year Riki wrote an article for TGForum with the ironic title '…Only a Crossdresser', in which s/he wrote:


"Once crossdressers ever *really* come out, and begin to enunciate the politics of the direct, head-on challenge their very existence poses to gender regimes, I think we have a truly revolutionary force on our hands, a potent force. The only question is, how long will they think of themselves, and allow so many of us to think of them, as '…only crossdressers?' "

Also that year, when Sean O'Neill in Colorado was sentenced to 90 days for statutory rape after consensual sex but without revealing his gender history, Wilchins commented:


"If you look androgynous and someone wants to claim that you're passing yourself off as the other gender, you've just committed a felony".

Riki also campaigned with Hermaphrodites With Attitude and Lesbian Avengers.

In 1997 hir book Read My Lips: Sexual Subversion and the End of Gender came out, and became one the iconic books of 'transgender' as it was then conceived, and along with Kate Bornstein and Leslie Feinberg, Wilchins was one of the 1990s iconic transgender persons. It was also a kickstart to the burgeoning Gender Queer movement. The book is a mixture of gender theory a la Judith Butler and Michel Foucault mixed with Riki's personal experiences. It also includes photographs by Mariette
Pathy Allen. Amongst other things s/he says:

"I have no interest in being part of a transgender or transexual movement whose sole purpose is to belly up to the Big Table and help ourselves to yet another serving of identity Pie, leaving in our wake some other, more marginalized group to carry on its own struggle alone. What I am interested in is the original cultural gesture to regulate and contain what your body and mine can mean, or say, or do. The point of a gender liberation movement for me … is also about the seventeen-year-old Midwestern cheerleader whose health is destroyed by anorexia because 'real women' are supposed to be preternaturally thin. It's about the forty-six-year-old Joe Six-pack who wraps his car around a crowded school bus on the way home from the bar because 'real men' are supposed to be heavy drinkers. It's about the unathletic and fat little boy who's physically attacked by his classmates everyday after school. It's about the two lesbian lovers stalked and killed on the Appalachian trail in Virginia. It's about the aging body succumbing to an unnecessary hysterectomy because certain kinds of gendered bodies simply don't matter as much. And it's about the sensitive, straight young man who is repeatedly raped his first year in prison because, within that environment, he's received as genderqueer, genderdifferent, or simply gendervulnerable".


"Academics, shrinks, and feminist theorists have traveled through our lives and problems like tourists on a junket. Picnicking on our identities like flies at a free lunch, they have selected the tastiest tidbits with which to illustrate a theory or push a book. The fact that we are a community under fire, is irrelevant to them. They pursue Science and Theory, and what they produce by mining our lives is neither addressed to us nor recycled within our community … Our performance of gender is invariably a site of contest, a problem which – if we could but bring enough hi-octane academic power to bear – might be solved".

The same year GenderPAC produced The First National Study on Transviolence, with 402 respondents the most extensive study on violence against gender variant persons. Later in 1997 Wilchins and GenderPAC made a tactical agreement with the Human Rights Campaign (HRC) that 'gender identity' and 'gender expression' be dropped from that year's version of the Employment Non-Discrimination Act (ENDA) to improve its chance of passing. In exchange both groups would lobby for gender variance to be added to the Hate Crimes Statistics Act. This of course infuriated the various trans activists groups – the more so as both acts failed to pass.

Wilchins was on the cover of the Summer 1999 Transgender Tapestry. By that time Wilchins had managed to push out of GenderPAC most representatives of the founding transgender organizations with the exception of Tony Barreto-Neto from TOPS and Carrie David from IFGE, and converted the supposedly political campaigning organization into a non-profit educational charity. GenderPAC started recruiting state and campus co-ordinators. In December 2000, Gina Reiss, GenderPAC Managing Director was quoted: 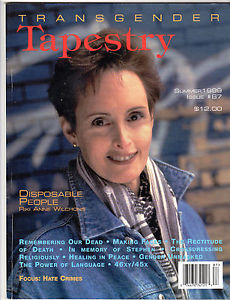 “I’m tired of the fact that 85% of the people calling the office are transgender people
seeking help”.

In a speech that year Wilchin said:


"A transgender struggle is an important thing, but it is not my fight. In fact I personally have no interest in being transexual or transgender… What I am interested in is the original cultural gesture to regulate what your body and mine can mean, or say, or do".

In 2001 Tony Barreto-Neto was forced out. Later that year, Time Magazine selected Wilchins as one of "100 Civic Innovators for the 21st Century." Wilchins was a featured columnist on gender issues for The Advocate.

In 2002, Riki with Joan Nestle and Clare Howell edited GenderQueer: Voices from Beyond the Sexual Binary which included essays by Sylvia Rivera, JT Leroy, Cheryl Chase, Gina Reiss, Rusty Mae Moore and many others. It includes four essays by Wilchins: A Certain Kind of Freedom: Power and the Truth of Bodies. In the fourth, "Deconstructing Trans", s/he wrote:


"It's fair to say that 'transgender' was created by the gay and feminist movements. Its emergence became practically inevitable from the day those movements began moving away from gender. … Genderqueerness would seem to be a natural avenue for feminism to contest Woman's equation with nurturance, femininity, and reproduction: in short to trouble the project of Man. Yet feminists have been loath to take that avenue, in no small part because queering Woman threatens the very category on which feminism depends."

In 2004 Riki published hir primer of theoretical concerns, Queer Theory, Gender Theory: An Instant Primer. However at $63 it was priced not to sell. S/he worked with anthropologist David Valentine. He helped hir edit Read My Lips, they wrote a paper together on violence against gender variant people, and s/he is frequently mentioned in his Imagining Transgender. They both critique the obligatory identity requirement for being transgender.

In 2009 s/he closed GenderPac, and founded TrueChild which promotes "'gender transformative' approaches to philanthropy and policy that challenge rigid gender norms and inequities in order to improve life outcomes for at-risk youth".
EN.WIKIPEDIA      AnneLawrence.com       BCHolmes       LinkedIn

In earlier days Riki prefered to spell 'transexual' with one 's' to avoid the medical implications.   However more recently she has been spelling it 'transsexual'.

This site is called 'gender variance who's who' and so of course we welcome those who speak up for other forms of gender variance in addition to transgender and transsexual.

However Wilchins did upset many trans activists by downplaying the trans aspect of GenderPAC.  S/he should have made it clear from the start what GenderPAC would be doing, and relied much less on donations from trans groups.