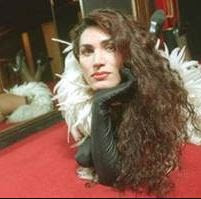 Gerardo Virguez, the son of a retired military officer, studied dentistry at the Universidad de Buenos Aires. He also performed in nightclubs and discos, sometimes as a travesti, Cris Miró.

He he was discovered and was offered a position as a showgirl at the Tabaris theatre. He was a
woman on and off stage, and the producers said nothing. When it later came out that Cris Miró was not a woman, Cris became the first Argentinian travesti to become a star.

In 1997 he developed medical problems, and he died aged 31.
ES.WIKIPEDIA