Bobby Kork worked as a circus ‘hermaphrodite’, mainly in the 1940-50s. 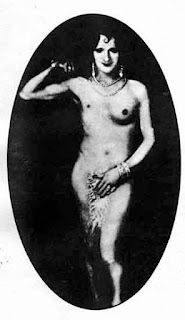 In the style of circus side shows, he was said to be a true ‘hermaphrodite’, although he faked the vertical division as expected in show-business, and had only one implant. He was strong and well able to beat off a spectator who wished to fondle the female half. His last name was taken from the way that he did the gaff involving an elastic band and a cork.

Bobby was also a transvestist in his private life, and also a photographer.  He accrued a collection of photographs mainly dated 1940-54, featuring full-length drag portraits, and of gay men from the war period. This collection has been acquired by Cornell University.

This site claims that Bobby was Anita Codona and died in 1943.