Herbert Beeson was raised in Summitville, Indiana. At 17 he was working as a clerk in a general store, and helping out three nights a week as a stage hand at the village theater. 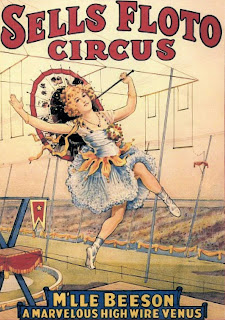 A small circus, the Marvelous Lucknows came to town. Herbert took up with Margaret, the slack wire dancer, and joined the troupe. Seven months later, in Texas, Margaret slipped and was hurt, and Herbert practiced in wig and skirt, took over her act as Berta Beeson, and graduated to tight rope. Margaret and Herbert also married.

From 1917-1923 Berta was a featured artist at the Sells-Floto Circus which billed her as M’lle Beeson, and as she was the star they had no other acts performing at the same time. Berta Beeson performed in Vaudeville during the off season.

Ringling Bros, Barnum & Baily Circus (RBBBC) lost their star high wire dancer, Bird Millman in 1923. She was replaced by Berta Beeson who canceled his contract with Sells-Floto.  Like Bird she wore a calf-length dress with flounce and fluff, but was now being described as “the Julian Eltinge of the Wire” which implied that her her gender was an open secret.

Berta Beeson, high wire performer, retired in 1936. Herbert Beeson, who became known as Slats continued with the RBBBC as a 24-hour man (advance advertizing before the circus arrived in town), and then in the 1950s as an announcer. He was also on the circus baseball team.

By 1929 practically all travelling circuses in the US had been absorbed by Ringling Brothers.

Thank you to Stacy Wilderness for her site on Berta Beeson.

It is normal for high wire artists to retire as they approach middle age.  Beeson seems to have given up female impersonation at the same time.

It is not clear whether he performed in Vaudeville as a woman or as a female impersonator.

The Wikipedia page on Summitville does not list Beeson as a prominent resident.
Time: 02:25