Born in Las Palmas in the Canary Islands, San Juan went to Madrid at age 19, and started acting. At 29 she had completed transition. 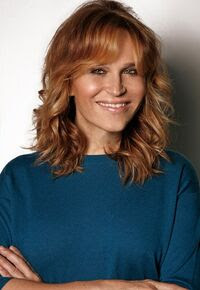 She did stand-up comedy in bars, and has acted in 22 films, and directed 4.  Abroad she is best known for her role as a transsexual in Todo sobre mi madre (All About My Mother), 1999, by Pedro Almodóvar, which led to a lot of speculation about her own history. She has said:


"I'm not a transsexual or a transvestite, There is a lot of confusion about me, but I am an actress, and that is all there is to say about that".

In 2000 she was presented with the "Woman of the Year" award by the National Board of the Spanish Women's Association. She has her own theatre company, and has gained many awards. She is also a well-known monologist.