Woolworths, Windsors and cutting off cocks

Grandson of Frank Woolworth of the chain stores. A notorious and uninhibited queen who relied on his mother’s money to get him out of trouble, and keep him out of the courts.


Dressed as a nun, he had his chauffeur stop in the middle of a bridge and got out and squatted: two cars collided. He would dress as a female prostitute, or with pillows under his dress as grand society hostess Elsa Maxwell. He was often in drag at his mother’s parties. He did drag while entertaining his friend the homosexual New York Cardinal Francis Spellman.

In , he stood on his hotel balcony, imitated Mussolini, and then pissed on the crowd below. He is rumoured to have killed one lover who had become inconvenient. 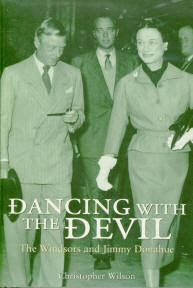 He is infamous for a party in in 1945 or 1946 where he invited servicemen found in a gay bar. One of the service men – in a drunken stupor – either lost his cock as the guests attempted to shave his pubic area, or part of his ear as he was being passionately fucked. Either way Donahue’s mother paid him an enormous sum to keep it out of court.

In 1950 Donahue took up with the much older Wallis Simpson who was still married to Edward Windsor, Duke of Windsor, who had briefly been King of the in 1936. Their affair continued for four years while he financed the , and there was much speculation as to what Donahue and Simpson did with each other, although there are those who say that Donahue’s affair was actually with Edward, and that Wallis was acting as a beard.