Wind was born in Ludwigshafen am Rhein, across the river from Mannheim, and was raised with the name Adolf.

With the start of the Great War in 1914, Adolf volunteered for the German Navy, was first assigned in the trenches in Flanders, but was then transferred to the SMS Friedrich der Große, a Kaiser-class battleship which survived the war intact. After the November 1918 Armistice the Friedrich der Grosse and most of the other German Kaiser-class ships were interned by the British Navy in Scapa Flow in the Orkney Islands, where the German Admiral had the fleet scuttled so that they could not be used by the British. The crews were interned on the islands before being returned to Germany.

By this time Adolf had become an accomplished wrestler. After more time in the Navy, Adolf returned to Ludwigshafen, and found an office job with one of the companies that merged in 1925 to found I G Farben, which became the largest company in Europe and the largest chemical and pharmaceutical company in the world. Adolf also became well-known as a wrestler in the Mannheim area.

In April 1923 Adolf married Elisabeth, and within two years they had two sons. In October 1928 Wind came down with a severe case of rheumatism that took months to get over. Afterwards Wind was a different person:

“I started to take an interest in women’s clothes and dresses. I began to feel awkward at times when I mixed with my fellow men-workers.”

Wind also took up knitting and did the family darning. Wind first wore female clothing at the Shrove-tide festival (Mardi Gras) as many men did. An attempt at suicide led to an explanation to Elisabeth.

After an initial shock, Elisabeth was supportive and urged a consultation with doctors. Adolf spoke to the welfare department at I G Farben and they arranged a visit to Berlin to see Magnus Hirschfeld. Hirschfeld confirmed that Wind was becoming a woman, explained that an operation was possible and Wind was sent home to discuss the issue with Elisabeth.

At last, in October 1931, Wind entered a clinic in Frankfurt for the first of seven operations and an experimental hormone treatment. It was felt that Wind belonged in neither the men’s nor the women’s wards, and room was found in the children’s ward. For the first time in her life Wind took an interest in children and was even assumed by a visitor to be the children’s nurse.

Afterwards, back home, there was a problem with the two sons in who this strange woman was. The boys settled the issue by calling Wind “Tante” (=auntie). Wind took the name Hertha, and was said to be the sister of Elisabeth. Hertha left I G Farben who gave her a pension. Her co-workers gave her a leaving present of a fur coat.

The Winds had previously run a small food shop below their flat as a sideline. Now Elisabeth mainly served in the shop while Hertha did the domestic work. However Wind’s legal position had not changed. In 1937 she was called up for reserve training with the Navy. On arrival she was assumed to be Frau Wind who had called to collect her husband’s papers. By luck the former captain of the Friedrich der Grosse was in the building, and Wind was able to explain to him, and he got the situation put right.

However Hertha’s paper’s were still those of a man. Her doctor urged her to stage a showdown. She went to the public baths in Frankfurt and attempted to enter the men’s section, showing her id that said that she was a man. The kerfuffle seemed to be going nowhere, but a few months later she did receive official permission to wear women’s cloths, and the next year new identity documents but as Fraulein, not Frau. And she became Frau a year after that. 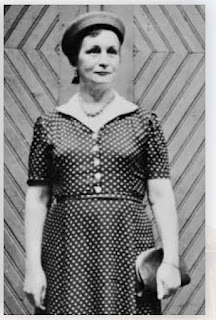 In 1940, in the early stages of the new war, Elisabeth and Hertha applied to adopt a baby girl. After Hertha took a four-month Mothers’ Course and gained a diploma, they were permitted to do so.

One of their sons died on the Russian front. They lost their home and all their belongings during an Allied bombing raid.

Elisabeth and Hertha divorced after WWII. In 1955 they were in the news when Hertha had proposed to publish her autobiography, and Elisabeth applied to a court in Mannheim in objection as it would impact on her privacy.

I presume that Elisabeth won her case.   I could not find a statement to that effect but there is no book listed in World Cat for Hertha Wind.

Some sources refer to Hertha as 'Elisabeth Wind'.  It is possible that she took her wife's name, but is more likely that it is a reporter error.

In the 1930s one remained Fraulein until marriage.   In modern Germany, one becomes Frau on turning 18.

There was another trans woman in Ludwigshafen: Liddy Bacroff, who was less accepted in the Third Reich and died in the Mauthausen concentration camp in 1943.