In the 1890s and the first few years of the 20th century, it was a lot more difficult to proceed down the transgender path.   Many settled just for stage performance.   The person described here, a porteña  (a resident of Buenos Aires) for whom we have neither a male nor a female name, just a performance name, could be regarded as either a heterosexual transvestite or a heterosexual drag queen, a full eight years before Hirschfeld's book that is given credit for pointing out that not all transvestites were 'homosexual'.

De Veyga collected several gay and trans life stories in the first few years of the century.   While he was ahead of Hirschfeld in doing this, he published only in a journal, and never published a book on the topic.  In 1904 de Veyga left off his clinical histories and became the Surgeon General of the Argentine army.

In 1895 in Buenos Aires, a city quickly growing, two-thirds of the immigrant population were men; in 1914, nearly four fifths of Buenos Aires male adults were foreigners. (statistics given in Salessi) 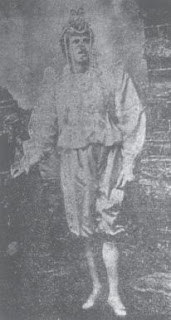 “Rosita” was one of the minority of men to have a wife in the city. He began by wearing costumes during carnival in the 1890s, continued to do so at other times of the year. He performed in song and dance groups, became well known in the local gay scene, “mixing with uranists of every species".

He took the name “Rosita de la Plata” which was already being used by an Argentinian circus equestrienne. For a while his fame surpassed that of the other Rosita, although with time other performers displaced him.

“To what does he owe his fame? To very little, to be sure. To his care in always lying in wait for parties and to his indefatigable activity in the labour of feminine imitation. ‘Rosita’ follows fashion, and sets the fashion for his peers. Here, he is portrayed in the photograph, in a matinee dress, inciting envy in many for his gracious air and arrogance at the same time. She has imposed the fashion of several costumes and of these outrageous portraits that seem to be a speciality of these people, so idiosyncratic are they.”