There were several Eldorados in Berlin in the interwar period. Our major interest is in the three opened and run by Ludwig Konjetschni. Other bars catering to transvestites were Hannemann, opened in 1892, and later the Mikado Bar, the Monocle Bar, Silhouette and the Bülow-Kasino. Many of the sources do not clarify which Eldorado is meant. I have sorted them out as well as possible.

in the Kreuzberg district of the city (not owned by Konjetschni). Opened in 1919.

1921 Wyndham Lewis (1882-1957) Vorticist painter/author visited Berlin. His impressions of Eldorado appear in his 1931 pro-Nazi book, Hitler. The first 3 chapters are devoted to a diatribe against ‘the Haupstadt of Vice’. He derided the “Nigger dance luxury-spot[s]’, the ‘night-circuses, Negertanz palaces, naktballeten, flagellation-bars, and sad wells of super-masculine loneliness”. Of the transvestite bar, the Eldorado, he wrote: “[p]re-Hitler Berlin was a sink of iniquity – the fingers of any moderately fussy patriot must have itched to spring-clean it. Its male prostitutes alone, with their India-rubber breasts and padded hips – the fairy hostesses of the Eldorado – were a standing invitation to the Prussian to organise a “March on Berlin”. He further presents Adolf Hitler as a man of peace. Lewis did change his mind about Hitler during a visit to Berlin in 1937.

in Charlottenburg. Opened 22 March 1922 by Konjetschni. It was advertised in gay and lesbian publications as ‘Treffpunkt der Internationalen Mondänen Welt (“Meeting Place For The International World)”, and was for three years a huge success.

1923. US novelist, Robert McAlmon (notional husband of Bryher) wrote: “Several Germans declared themselves authentic hermaphrodites [sic—transvestites], and one elderly variant loved to arrive at the smart cabarets each time as a different type of woman: elegant, or as washerwoman, or a street vendor, or as a modest mother of a family. He was very comical and his presence always made for hilarity.” “At nights along the Unter den Linden it was never possible to know whether it was a woman or a man in women’s clothing who accosted one. That didn’t matter, but it was sad to know that innumerable young and normal Germans were doing anything, from dope selling to every form of prostitution, to have money for themselves and their families, their widowed mothers and younger brothers and sisters.” McAlmon also wrote a short story, “Miss Knight” about a US trans woman in Berlin who does lots of alcohol and cocaine before moving back to New York.

1924, Nazi Party Reichstag Deputy Ernst Röhm moved to Berlin and spent personal time at homosexual bars including the Eldorado. A year later, one of his tricks attempted to blackmail him. He instantly reported him to the police.

The film Geheimnisse einer Seele (Secrets of a Soul), 1926, was partly filmed there. G W Pabst (dir) Hans Casparius (camera). Casparius intended to make a second film at Eldorado, Sex Shades, and met what he took to be a suitable transvestite. However when he asked why she was a transvestite, she replied “Because I earn much more that way”. Casparius was repelled by her lack of integrity, and called off the project.

in the main entertainment district in Schöneberg. Opened in 1926 by Konjetschni in the former August-Victoria-Sälle dance hall directly opposite the famous Scala Variety Theatre. This venue was featured in most guidebooks, and attracted celebrities. It also featured transvestite taxi dancers – you could buy a chip to exchange for a dance. 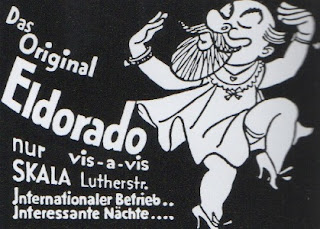 A huge banner inside the entrance proclaims: “HIER ISTS RICHTIG! (here it is right!)” Nearby are two oversized frescoes that show Ulysses being beckoned by gorgeous Circes (of course, in drag) and the trial of Paris, who hesitates between a trio of male Graces. The orchestra wear unisex silk blouses and play French and Argentinian music. The customers amuse themselves attempting to guess the birth gender of the dancers. The floor-show is at midnight, and plays on the ambiguity of the gender of the performers.

Curt Moreck’s 1931 guidebook to Berlin: “It’s all staged, and only completely naive people think it’s real. Even the real transvestites who place their abnormality in the service of the business become actors here. Between the dances, in which even a normal man can enjoy the spicy pleasure of dancing with an effeminate man dressed as a woman, there are floor shows. A male “chanteuse” with a high-pitched voice sings ambiguous Parisian songs. A male star who looks like a young girl does graceful feminine pirouettes under the spotlight. He is naked except for a bras and a g-string, but even this nakedness is deceptive: it puzzles the audience and still leaves doubt as to whether it’s a man or a woman.” 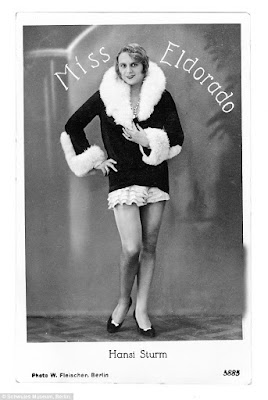 1927. Painter Otto Dix visited Eldorado, and made paintings of some of the trans women. 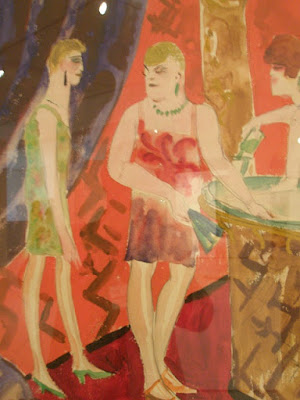 Francis Bacon’s father attempted to straighten him out by sending him to Berlin in the care of a distant uncle. However the young Francis soon bedded his uncle. In Berlin he was delighted to discover the transvestite bars such as Eldorado and the rent-boy culture.