George Bertrand was a Maori of Te Ati Awa, Ngati Mutunga, Ngati Raukawa, and Ngati Porou descent.  A second child was adopted out.  The father quickly disappeared, and the elder was at first raised on the mother's parents farm. He became George Beyer when his mother Noeline remarried in 1962 to Colin Beyer, a lawyer who later became a Securities Commissioner, and they moved to Wellington.

From 1969-71 George attended the all-boys Wellesley College where he was a few years behind Claudia McKay who is now an activist with Agender.

Noeline and Colin separated in 1971. Young Beyer began acting while at school, and left at 16 intending to be an actor.

A year later Georgina started living as female. She worked as a drag queen, stripper and prostitute in Wellington and in Sydney, Australia. At one point she was beaten and gang-raped. However she persevered and completed transition in 1984.

She acted on stage and in several television productions, and was nominated for best actress in the New Zealand Gofta Awards for her part in Jewel's Darl, 1985.

She moved to rural Carterton (map) and found work as a radio host and social worker. She was quite open about her gender history:

Georgina was elected to a local school board, and lost in an attempt for the town council by only 14 votes. She was elected mayor in 1995, and then in 1999 ran as the Wairarapa Labour candidate for Parliament. As a left-wing Maori trans woman it was not expected that she would win in such a traditionally conservative district. However, her opponent's negative campaign strategy backfired, and Beyer won the seat. In her maiden speech she said:


"Mr. Speaker, I can't help but mention the number of firsts that are in this Parliament. Our first Rastafarian [Nándor Tánczos]… our first Polynesian woman… and yes, I have to say it, I guess, I am the first transsexual in New Zealand to be standing in this House of Parliament. This is a first not only in New Zealand, ladies and gentlemen, but also in the world. This is an historic moment. We need to acknowledge that this country of ours leads the way in so many aspects. We have led the way for women getting the vote. We have led the way in the past, and I hope we will do so again in the future in social policy and certainly in human rights."

In 2003 she helped to pass the Prostitution Reform Act, which made New Zealand laws on prostitution a liberal model. She opened her speech: 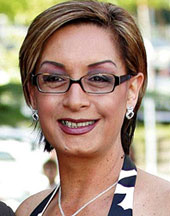 "Madam Speaker, I shall take the liberty of assuming that I am the only member of this House with first-hand knowledge of the sex industry".

In 2004 she was a proponent of the Civil Union Bill, which gave the rights of marriage to same-sex couples. She also attempted to introduce a private members Bill to add 'Gender Identity' to the Human Rights Act of 1993, but found herself alone when the acting Solicitor General opined that trans people were already covered by the Act, and the amendment was unnecessary. However she did persuade both the Solicitor General and the Attorney General to sign a statement to that effect, thereby putting that interpretation into law.

She has been a Justice of the Peace since 1997. She was also named Supreme Queer of the Year in 2000. In 2005, she stepped down as a representative for Wairarapa because of a conflict with her identity as a Maori with respect to the Seabed and foreshore legislation. She became a list Labour MP until 2007.

There had been a series of murders in Wairarapa in the early 2000s, and and she worked as a member of Violence-Free Wairarapa. Unlike other ex-MPs she was unable to get a position on any government boards despite Labour still being in power. She considered returning to show business, but without success.

In 2010 there was talk of her running for mayor of Masterton, which lost her her job at a local jewellors. In 2011 she was living on unemployment benefits, and had been obliged to sell her house.