The Shôchiku Corporation is Japan’s oldest film and entertainment company. It was founded in 1895 by Ôtani Takejirô 大谷竹次郎. It took the name Shôchiku in 1902 when Otani was joined by his brother Shirai Matsujirô 白井松次郎. (‘Shôchiku’ is a word play based on alternate readings of the combined first characters of their names, “Matsu” (shô) and “Take” (chiku)). It quickly established a virtual monopoly through ownership of Kabuki troupes and theatres. From 1920 it established a studio and was making films. It was one of the first Japanese film companies to replace onnagata actors with actual women, as it adopted the practices and customs of Hollywood.

The Shôchiku Shōjo Kageki (Shôchiku Girls’ Revue, SSK) was founded in Osaka in 1920 to compete with Takarazuka. 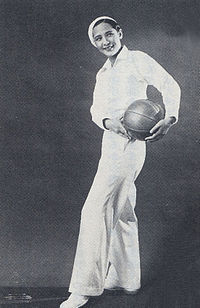 One of the first to enrol was Mizunoe Takiko (水の江 瀧子) IMDB, who became an otokoyaku, and is credited with being the first to cut her hair short like a man rather than hide it under a hat.

In 1922 Mizunoe Takiko led one of the Japanese labor movement's few successful actions of the period when she headed a strike of the Shochiku Opera Company's performers in reaction to wage cuts. This was referred to as the ‘Pink Strike’. Almost 50 strikers were arrested, including Mizunoe. Eventually the action was successful, in part because the company could not be seen as exploiting its most popular star.

Wakasa to netsu no shûdan geijutsu, IMDB a 9 minute film of the Shôchiku Shōjo Kageki was made in 1933 and included Saijo Eriko in the cast.

In January 1935 there was an attempted double suicide by leading musumeyaku Saijo Eriko and a fan, trans man Masuda Yasumare (a male name) after a nine-month romance. Eriko wrote an account for a women’s magazine shortly afterwards, in which she stressed Yasumare’s physical beauty, his straight white teeth, his Harold Lloyd spectacles and his ‘Eton crop’ hairstyle. It was the masculine Masuda who bore the brunt of press criticism.

Mizunoe Takiko continued to be popular in male roles throughout the prewar period, and toured northern China, the United States, and Europe, but returned to Japan as the country entered World War II. After the 1941 wartime ruling that forbad the otokoyaku from dressing as men, Mizunoe played female roles.

The Osaka SSK was renamed the Osaka Shochiku Kageki (OSK) in 1943 dropping the word ‘Shōjo’ as the Takarazuka had done. Unlike the Takarazuka the OSK kept performing, even during the air raids.

One month after Japan’s WWII defeat in 1945 , the OSK staged a revue to improve moral. This led to its post-war revival.

Ôtani was charged in 1947 as a Class A war criminal because of his propaganda films of the war years. He was expelled from the film industry (but quickly came back after the 1953 end of the US occupation).

The Osaka and the Tokyo branches of the Shôchiku Revue were separated, also in 1947. 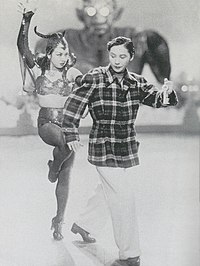 Mizunoe Takiko played a male role in the 1949 film Hana Kurabe Tanuki Goten, and appeared on Japanese television in female roles. By the mid 1950s she was a film producer - one of the first female film producers in Japan. 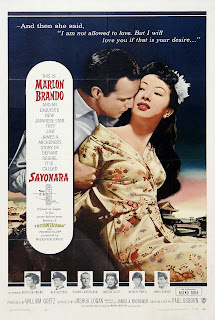 The 1957 Hollywood film, Sayonara, IMDB EN.Wikipedia with Marlon Brando based on the novel by James Michener. The Brando character, USAF, defies regulations against inter-racial marriage and becomes involved with a Kagekidan performer (although not one who plays male roles). In the original novel the revue is the Takarazuka Revue, but in the film it is named the Matsubayashi Revue and in fact was performed by the Shôchiku Kagekidan). The female lead Taka Miiko 高美以子,who plays Hana-Ogi is not a member of the Shôchiku Kagekidan, but a Japanese American who had been interned in WWII. The protagonist’s US fiancée takes up with a Kabuki performer (yellow-face acting by Mexican Ricardo Montalban) but unlike real-life onnagata he performs both male and female roles. (Audrey Hepburn had been offered the role of the Shôchiku Kagekidan performer, but sensibly declined.)

1965, the OSK performed by invitation in Moscow, and returned in 1967. In 1970 the troupe was renamed OSK Nippon Kageki.

Mizunoe Takiko’s career in film and television ended in 1987 after her nephew Miura Kazuyoshi was accused of murdering his wife. This led to claims that he was actually Mizunoe’s love child (she had never married). She then retired and died in 2009 at age 94, a year after Miura either killed himself or was murdered in a Los Angeles jail.

Both the Osaka and the Tokyo branches of the Shôchiku Revue formally disbanded in 1990, although there have been revivals. 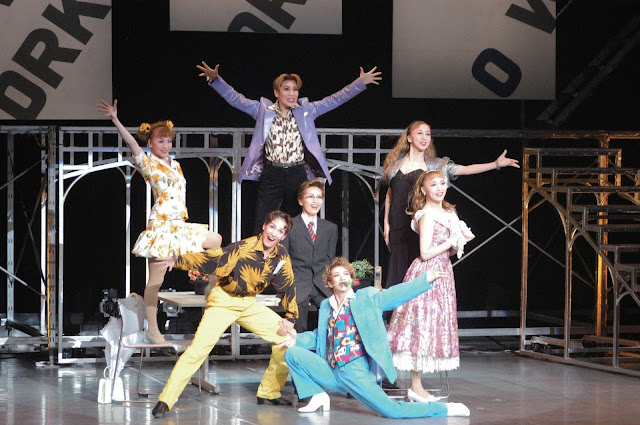 “Although its male impersonators perpetuate the heavy makeup, stiffly squared shoulders and sharply articulated arm movements of the otokoyaku, the female roles are more overtly voluptuous. The current ‘male’ star, Kyoko Kai, carries her weight in her upper body and moves her torso and limbs like a man: the effect is mesmerizing but unrefined. Tossing her red hair in a Spanish disco number, stomping her boots and twirling a purple satin cape like a camp Jose Iturbi, she takes an image of masculinity that is itself flamboyant and unintentionally renders it ridiculous. Traditional male impersonation seems to work best when it is based on an understated and self-confident image of masculine dominance.”

There is no entry in Jasper Sharp’s otherwise excellent Historical Dictionary of Japanese Cinema for Mizunoe Takiko.

This troupe, which grew out of an extracurricular dance club in Toyokawa City, gave its first performance in 1949. It had no fixed abode and mainly toured. It was managed by actor Ichikawa Dankichi, and was approved of as real kabuki in 1952. It used the word 'Shōjo' (girls') despite both Takarazuka and the Shôchiku revues having decided to drop it, but it was needed in this case to distinguish it from men's Kabuki.   As per Kabuki tradition at least ten members of the troupe have been awarded the prestigious Ichikawa name. They were a sensation across Japan in the 1950s.