Kohnheim, a tomboy who had grown up a masculine woman, and then passing as a man, was often mocked if he wore female clothing. As a man he passed well, had a small inheritance and wished to open his own business.

However he ran into constant problems applying for positions or renting an apartment, because of the female name on his papers. In Hamburg Kohnheim did not inform the police about his sex, although they knew anyway.

In Berlin he was picked up by the police, and referred to a physician, Dr Oskar Lubowski, who in turn contacted Magnus Hirschfeld. Hirschfeld examined him, and with the psychoanalyst Karl Abraham (1877-1925) wrote an evaluation using the pseudonym ‘Katharina T’ and referring to him as 'Fräulein',  with the conclusion:

“Considering her sexual abnormality and psychological characteristics, wearing men’s clothing is natural for the patient. The granting of permission is a question of existence for her. Forcing her to live as a woman can have an adverse effect on disposition. In men’s clothing she causes no public outrage, while in her women’s clothing she caused a disturbance, The very difficult existence of the petitioner would be greatly reduced by the police tolerating a masculine first name on the part of the petitioner.” (Hirschfeld: 154)

Hirschfeld and the lawyer Walter Jaffee went with Kohnheim to the Polizeipräsidium where Kohnheim received first a provisional permit and then a written one from Ernst von Stubenrauch (1853 - 1909) who had become Berlin police chief in 1908.

However as Hirschfeld had conceded that Kohnheim had perfectly formed female genitals, he was not permitted to change his name legally although he used the name Karl anyway. Hirschfeld learned from the experience and used more vague language in later cases.

In 1912 Kohnheim learned from a newspaper article that another masculine woman/trans man had succeeded in a change of the first name; he again appealed to the police, but again to no avail.  He wrote:

"I have proved that I could support myself as a man if I didn't cause offence and a stir everywhere because of my female first name. Up to now, I have only received temporary employment on recommendation, and (for example) I worked as a server in a large Berlin department store for a quarter of a year, without anyone having any suspicions or doubts about my masculinity! That is certainly saying a lot in a circle of at least 100 servers!" (Mak: 389)

This was the first German Transvestitenschein (permission to cross-dress) copying the French Permissions de Travestissement (which had been issued since 1800). 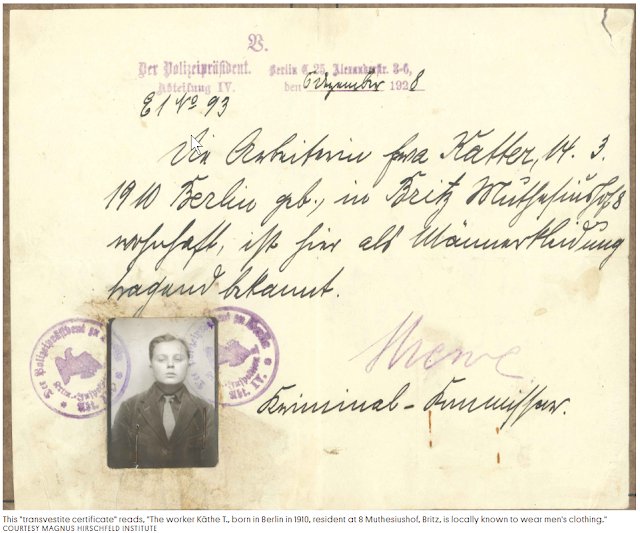 Karl Kohnheim was not included in the 17 cases detailed in chapter 1 of Die Transvestiten, 1910 as Kohnheim freely admitted to female lovers, and Hirschfeld restricted his cases to non-homosexuals. Kohnheim is in a follow-up chapter “Transvestitism and Homosexuality” in which only Kohnheim and Dina Alma de Paradeda are discussed.

Geertje Mak knew in 1998 that the real name of ‘Katharina T’ was Karl Kohnheim, so why do Herrn, Sutton and Frost not also know?