Shrovetide, also known as the Pre-Lenten Season or Forelent, is the Christian period of preparation before the beginning of the liturgical season of Lent.  It culminates in Shrove Tuesday which is also known as Pancake Tuesday or Mardi Gras.

This is Merrymakers at Shrovetide is a painting by the Dutch Frans Hals, painted around 1616–17, and currently on display at the Metropolitan Museum of Art in New York.

In the April 2022 edition of the Gay and Lesbian Review, Andrew Lear  (who is so old-fashioned that he still puts quotation marks around the gender of presentation unless it aligns with what he assumes to be the "real" gender) writes:

"And what about the 'maiden'? 'She' is dressed in an elaborately embroidered silk gown with a very grand lace collar and cuffs. But, of course, 'she' is not really a maiden at all.  First, 'she' does not have the elegant hairdo or make-up that would fit with the gown, and those fingers are particularly inelegant. But 'she' also has an Adam's apple and is therefore clearly a male.

In fact, since I started this description by putting 'maiden' in quotation marks, you may have figured out by now that this is a boy in drag. Indeed the Met has recently updated its label to point out the possibility. In retrospect, I'm surprised that only few years ago, when it was just a painting in a room full of Dutch paintings, I still happened to notice this anomaly."

Some cis females do have noticeable Adam's apples.

The term 'maiden' was used in previous centuries for unmarried women, young or otherwise, with a connotation of virginity (see the term 'maiden aunt').  These days of course it is regarded as impertinent to assume whether or not one is a virgin.  Hence 'Miss' or 'Fraulein' are much less used.

Whether she is a 'maiden' or a sexually experienced women, she may have either removed her wig or removed the pins holding up the 'elegant hairdo' that Lear expects.  The expression 'letting one's hair down' for late evening relaxation comes exactly from this practice.

"A boy in drag".  The term drag covers lots of different practices.   The 21st century RuPaul-style exaggerated femininity is very different from the 20th century 'female mimics' or the 19th century 'female impersonators' who aimed to be taken as women.   While the term 'drag' is sometimes said to be a 16th-century acronym from 'dressed as girl' it was not a common usage in 16th or 17th century writings.   The term in that period was 'boy actor' or 'boy actress', and despite the basic commonality of transvesting, boy actresses at that time had very little in common with modern drag performers.

Here is a period copy of the painting, set outside under the moon. 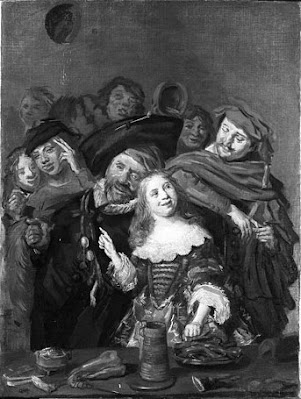 Most of the symbolism, the food, the bagpipe etc, are the same, but the woman at the centre looks more natural.
Personally I am not persuaded that she does have an Adam's apple, rather than simple neck shadow, but in either case Hals could have added or not added a couple of brush strokes to suggest differently.
It does not seem to occur to Lear that perhaps a woman sat for the painting, and Hals mischievously put in suggestions that she was otherwise.  A sort of reverse gender crossing.  Gender crossings were standard in renaissance theatre where a boy played a female character who disguised as a boy.  To take that trope and apply in painting would be a neat idea.