Rees then wandered from job to job, city to city. By 1951 she was in Los Angeles and had consulted a few psychiatrists about her gender quandary.

Rees then found a “kind and understanding” psychiatrist on Wilshire Boulevard. They wrote to the American Medical Association re treatment for gender issues.

“Their reply was to state that no legal medical aid of this problem could be obtained in the United States (although there are no legal restrictions against transitions).” (p32)

Later the AMA provided the names of three specialists in Europe, and the first that the psychiatrist wrote to was the endocrinologist, Dr Christian Hamburger in Copenhagen who had just become famous because of his patient, Christine Jorgensen. He advised hormonal treatments, and stated that sex-change surgery was no longer available in Denmark for foreigners since a change in the law. He suggested that they contact Dr. Frederick Hartsuiker in Haarlem in the Netherlands.

The psychiatrist prescribed female hormones, and also suggested that Rees, Tamara as she was becoming, should also live and dress as female.

“he also wanted or thought he could prove that with freedom of expression and acceptance that the desire for surgical transition would become less intense, indicating this change of social pattern … I will state that it came as close to giving me the emotional release I was seeking than any other type of therapy attempted up to that time. Together with the hormone therapy plus the present experiment, I felt happier and more at ease but I had told him at the commencement of this experiment that I knew this would not be in total the solution I required. This proved to be quite true.” (p33)

After six months they began corresponding with Dr Hartsuiker.

“He in turn requested a complete resume of the psychiatric history and tests, together with all physical and biological tests, that had been performed. We complied with this request and late in 1953 we received confirmation that this psychiatrist would be willing to take my case under advisement.” (p33)

In November 1953, Tamara sailed on a Holland American steamship to Rotterdam. She took a train to Haarlem, and quickly had an appointment for the following Monday. Hartsuiker

“stressed again and again the importance that my choice would be irrevocable, slow and painful and the outcome could never be entirely assured. Upon receiving my assurance that I realized all of this and releasing him from any personal claim, I still felt and requested that such procedure for surgical transition should be carried forth without further delay.” (p34)

A second opinion was obtained from Dr Carp of the Psychiatrische Cliniek in Leiden, and one other, and then, as required by law, the opinion was submitted to a court of magistrates which reviewed the decision, decided it was correct and approval was granted.

The operation (presumably castration) was on 5 January by Dr Nauta in the Diaconessenhuis in Haarlem. On recovery, Tamara went shopping for female clothes, and moved into an apartment that had been rented. The landlady became inquisitive, and Tamara told her the situation:

“To my surprise I found her very understanding and while she said that she could not put her ﬁnger on the exact reasons for her suspicions, she knew that something was not right. I then showed her the letters and other documents from my doctors and attempted to explain the circumstances. This woman accepted me with open arms and agreed to help me in the many little ways which would be necessary to completely reestablish myself. I say now with all sincerity that I owe this woman a debt of gratitude which I can never repay.” (p38)

As required by law Tamara registered with the Aliens Police (Vreemdelingendienst) and afterwards was followed and observed. She was to wait six months for the second stage operation (penectomy). Tamara learned some Dutch, and adjusted to their then lifestyle. With the changes from the female hormones, and given that Tamara was small framed and only 5’4” (1.613m) she was able to pass. She had frequent appointments with Hartsuiker, Nauta and a study group at the University of Leiden.

In May she was seriously ill, which was attributed to the hormonal regime. After recovery and several weeks of testing, the second operation was arranged. A more experienced surgeon was required, and the services of a professor of medicine who had come to Holland as a refugee from the concentration camps of the previous decade. The surgery was done in a small secluded hospital in early June, and Tamara was 15 days in the hospital afterwards.

She had also annoyed the Aliens Police who did not know where she was.

The US Consulate was very “understanding and cooperative” but did not produce a revised passport. Rees also wrote to the US State Department and to her California congressman. Finally, after many months, a temporary passport would be issued for the one trip home to then be surrendered until a legal change as required by the laws of California was effected. Rees’ parents did not understand and wrote bitter letters. Tamara arranged that they should speak to Harry Benjamin during his summer months in San Francisco, but they rejected the offer.

After receiving a “very disturbing letter” from her parents in November, Tamara took an overdose of sleeping pills and was unconscious for three days. The Aliens Police then arrested her as an attempted suicide, and put her on a ship for New York. Her gender history was supposed to be private, but she discovered that the ship's officers had been told, and they had passed it on to the crew.

In addition, the US Consul General in Amsterdam had asked the Veterans Administration to make special arrangements. An official there violated privacy and notified the New York Daily News, where the editor was a personal friend. The press were awaiting her arrival, but also a nurse and an official from the Veterans Administration who got her off the ship quickly, and through Customs and took her by staff car to a hospital in Brooklyn. In exchange for a four-article series of stories in her own wording, The Daily News transferred Tamara away from the hospital and other reporters and to the Hotel Commodore in Manhattan (later known as the Grand Hyatt).

After some days of shopping and writing the articles, Tamara flew to Los Angeles where she was met by the celebrity journalist Florabel Muir who took her nightclubbing, and the next day flew with her to Sacramento to meet her parents, who despite the bitter letters, were now welcoming.

The press were still interested. Tamara struck feminine poses and claimed that her ex-wife’s children had been fathered by someone else. At the end of the year she published a short biography. Back in Los Angeles, she performed in burlesque clubs, and also gave talks to gender-segregated audiences about sex and psychology. In 1955 in Reno she married James Courtland, a makeup artist, and hairdresser for 20th Century Fox. This was regarded as the first transsexual wedding, but lasted only a short time because of his jealousy.

She married again, to Bob Stevenson, and adopted children. Like Jorgensen, she became a patient of
Harry Benjamin who used her as a counseling resource for other transsexuals, and in the early 1960s she was interviewed by Ralph Greenson, psychiatrist to Marilyn Monroe and other stars, who interpreted her as in flight from homosexuality. 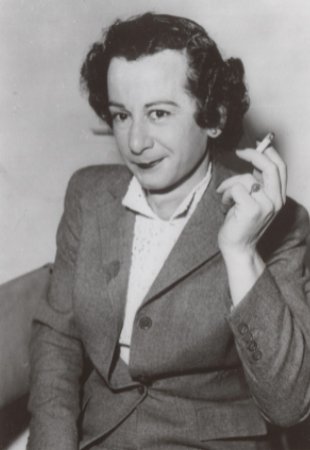 The Stevensons lived in Youngstown, Ohio and invested in property a little at a time. In 1975 they owned 4 small homes; in 1995 they owned 32. Bob was apparently very controlling, but they did remain married until the his death in 1997. Tamara then sold all the properties, and moved to Sacramento, California to be close to her sister. Roger the brother of her adopted son Bruce lived with her and became her carer. She fractured a hip in early 2000, and also developed cancer. The pain was so bad that she was on morphine.

Special thanks to Transas City for the best photographs and for the PDF of Tamara's autobiography.

Tamara spells her surname as ‘Reese’ on her autobiography, but everywhere else the name is spelt ‘Rees’.

In her book Tamara says that she had two operations, in January and then June 1954. This was presumably first castration and then penectomy as was the usual practice prior to Dr Burou in Casablanca inventing penile inversion vaginoplasty. In her autobiography (p43) she writes: “ in early June I underwent my second and most intensive surgery of my transition. I could have stopped here but felt that one further operation would be necessary. … I was still, not to all intent and purposes, fully of the female sex.” So presumably the third operation would have been vaginoplasty, except that she was deported before it could happen. However in 1955 she was assuring her audiences that the operation “enables me to fulfill my physical obligations as a woman”. So part of the story is missing.

Bakker, contrarywise, after claiming that her memoirs “are certainly not factually reliable” without giving details, assumes that she had only one operation in the Netherlands - castration and penectomy combined. In his footnote 42, he writes: “Correspondence between Benjamin and Hartsuiker shows that Rees’s story about having had a second and third genital operation in the Netherlands is not true".

Rees says that she was deported after an assumed suicide attempt. Bakker claims that the police changed their mind about permitting women in transition to dress as women.

Bakker p154 writes: “Rees is considered to be the third American transgender woman after Christine Jorgensen to have received gender confirmation surgery, the second being Charlotte McLeod.” By my count Rees was #6.

John Marks, Tamara’s nephew writes “The plastic surgeon (first of it's kind) worked on Tamera's face. During the operation, a nurse accidently poured alchohol on the open skin on the face and severely ruined the facial tissue. This forced her to go through several skin graphs in order to try and restore the skin to the cheeks and nose.” This is otherwise unknown. I have assumed that this is actually a reference to the 1946 mastoid operation that went wrong. It would be extraordinarily unfortunate for one person to have two separate facial operations go badly wrong.

I have looked for but was unable to find the four-article series of stories that Tamara wrote for the Daily News.

Given that Florabel Muir was a well-known journalist, did she not write about Tamara?  Again I could not find such.