John Campbell and his younger sister Marie, possibly from Govan, on the Clyde, were orphaned  in 1861.  Marie had worn male clothing due to ‘bad usage’ as a child.   John died two years later when Marie was 13.  He advised her to take his name and his clothes as such would ‘probably enable her the better to make her way in the world’.

In 1869 in Kirknewton, east of Edinburgh, the person now called "John Campbell" married Mary Ann, pregnant and already the mother of two.


Some months later, in May 1870, John deserted his family.   He found work in Renfrew, adjacent to Govan, east of Glasgow, at the forge of a local shipbuilding company, Henderson, Coulborn & Co.   He lodged with a family and became well-liked for his willingness to help in the home.   He began a relationship with a local woman, Kate, and took her on romantic trips to Edinburgh.

There was a smallpox epidemic 1870-2 in the Glasgow area.   John attended his landlady when she fell ill.   When the doctor called, he insisted that John needed to be admitted to the infirmary.  John agreed only if he were to remain fully clothed.   The doctor pressed, his suspicions aroused, and John admitted that he was Marie Campbell.   In Kirknewton, parish authorities had sought Mary Ann’s husband.  She had admitted that her husband was a woman, but as her children were not John’s her character was questioned and her claim dismissed.   On hearing the news from Renfrew, it was decided that Mary Ann and a Will Waddel, a witness to the marriage, should accompany the Inspector of the Poor to Renfrew.   John, on seeing Will exclaimed: “Is that you Will Waddel; how’s the wife and bairns?”.

He emigrated to New York, where he gave his name as Murray Hamilton Hall.  The name of his first wife in New York is not documented.   She complained about his flirtations and womanizing, and disappeared mysteriously after a few years.

Hall soon married again, on Christmas Eve to Celia Lowe, in the Presbyterian Church in Lower 6th  Ave, and they became US citizens together, 20 October 1875. They adopted a daughter, Imelda, but also known as Millie. Celia, also, complained of his womanizing. Murray ran an employment agency for domestic servants, and also became involved with the Tammany politicians, where he was a member of the General Committee, and was a personal friend of New York State Senator Barney Martin.

Murray was known as a man about town. Although slight and with a rather squeaky voice, he came across as very masculine, and drank and fought within the city political in-crowd. He always wore baggy, rather too large, clothes, and an overcoat even in summer.

In the US Census of June 1900, Hall listed himself as male, age 60 and that he had immigrated in 1846 from Scotland.  His daughter was listed as Millie, age 20 from Maine. 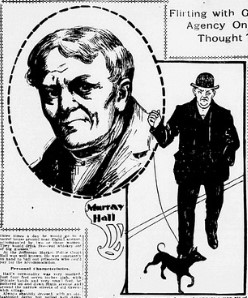 Murray Hall suffered cancer of the left breast for many years but avoided medical attention – he said that his declining health resulted from having been knocked down by a bicycle on Fifth Avenue. He purchased a considerable library of medical and surgery books, which he used towards self-treatment and to avoid disclosure. Finally, on his deathbed, he allowed his doctor to examine him closely.

On 19 January the body was buried  at night in an unmarked $12 grave at MountOlivet Cemetery, by his adopted daughter, Imelda.  For the first time since he was 13, the body was dressed in woman’s clothes.

The inquest was held on the 28th. Two days of testimony were taken from his doctor and from Imelda.  Imelda continued to refer to her father as ‘he’, and when nudged by the coroner to say ‘she’, She replied: “No … he was always a man to me, and I shall never think of him as a woman”. The all-male jury took just seven minutes to find that Hall had died of natural causes, and was a lady.

Alternate stories of Hall’s life were soon in circulation: that he was John Anderson, born Mary, from Ireland; that he had been born Elizabeth Hall in the lower west side of Manhattan; that he had worked the California gold fields in the 1840s.

The first wife in New York is not named.   There is no reason to assume that she was Kate from Renfrew, but no reason to rule that out either.

Imelda replied  “No … he was always a man to me, and I shall never think of him as a woman”, but only 9 days before had buried him in female clothes.  His sex-gender disparity had come as a shock to her, and she had not had time to think it through.

Imelda ("Story of ‘Murray Hall’ told by her adopted daughter") remembered that her adoptive parents were married on Christmas Eve in the Presbyterian Church in Lower 6th  Ave, but was not sure which year.   As a variant, Lydia Nelson has a footnote, #55, that they “ were married on Dec. 24, 1872 at the Church of the Strangers on Mercer Street. As of 1901, 'the record [was] on file at the bureau of vital statistics,' according to the Salt Lake Herald, January 27, 1901: 12”.  If this is so, the marriage to the first wife in New York was a matter of months, not years.

Thank you to Lydia Nelson for discovering the naturalization certificate and the census return of the Halls and including them in her article.   She also worked out where Murray’s unmarked grave is.

Most writers about Murray Hall take their facts from Havelock Ellis,  Hall was not mentioned in the original 1897 edition of Havelock Ellis’ Sexual Inversion (obviously), but  he was added in the 1915 edition.  Ellis states of Hall:

“Her real name was Mary Anderson, and she was born in Govan, in Scotland.   Early left an orphan, on the death of her only brother she put on his clothes and went to Edinburgh, working as a man.  Her secret was discovered during an illness, and she finally went to America.”

He cites the Weekly Scotsman, February 9, 1901 (which unfortunately is not available online).

This is supported by “The Murray Hall Case: Possible Solution of New York’s Strange Mystery: The Story of an Old Nurse”, cited above in which Mrs Canning, a nurse previously with the Edinburgh Hospital, tells of Mary Anderson whose brother John died and she took his identity.  He went to Govan and there married.   After infidelities and a separation, the wife disclosed that John was a woman, and a warrant was issued for his arrest.  John went to Duddison close to Edinburgh (no such place – did she mean Duddingston?).  Suspected of having smallpox, John was taken into the Edinburgh hospital, and his body discrepancy discovered.  He was arrested on the outstanding warrant.   Edinburgh Hospital had two sections: Hamilton Hall and Murray Hall.   Hence John’s name in New York: Murray Hamilton Hall.  I assume that Canning means the Royal Infirmary of Edinburgh, established 1729.   However I cannot find confirmation that it had two halls of that name – Google fails to find them, nor are they mentioned in Helen Dingwall’s A History of Scottish Medicine.

John Campbell and John Anderson seem to be two variants of the same tale:
ü  Born Mary or Maria
ü  Elder brother John who dies
ü  Takes John’s name and clothes
ü  Ellis has John go to Edinburgh; Campbell went to Kirknewton, east of Edinburgh
ü  Wife abandoned, she tells that he is a woman and a warrant is issued
ü  Works in Renfrew or Govan which are only 2 miles apart
ü  John is taken ill in the smallpox epidemic, and his body discovered to be discrepant.

These parallels are almost convincing.   Do we have a claim from 1901 that John Campbell and Murray Hall are the same?  Again Lydia Nelson delivers (p139):  “According to Sir Henry Littlejohn, Edinburgh, Scotland’s Medical Officer of Health, Hall (alias John Campbell) was born an orphan in Govan, Scotland; she wore her dead brother’s clothes to gain employment. (‘Masqueraded in Glasgow,’ Washington Post, January 29, 1901: 1)”.  Littlejohn was Edinburgh’s Medical Officer of Health.   He was also one of the two men who inspired Conan Doyle when he created Sherlock Holmes.