In the 1850s Mary Mudge was running a small dairy farm of nine acres and three cows in a village close to Tavistock, Devon. She lived with her sister and also took in lodgers.

By 1871 she was living alone in a cottage on the Duke of Bedford’s estate. By 1881 she was living with a 31-year-old gardener and his family, and was described as an aunt.

In 1885 she was taken sick, and was recommended to the workhouse in Tavistock.

She died there age 85, and as her body was being prepared for burial, was discovered to be male-bodied.


Catherine Coombs, from Somerset, educated at Cheltenham Ladies’ College, was married at 16 to a first cousin, 23 years older. He ill-treated her, and she ran away to her brother in West Bromwich. He was a painter and decorator, and helping him she learned the trade.

Twice the husband forced her return. On the third run-away, Coombes bought a suit of boy’s clothes, and took the name Charley Wilson.

Wilson obtained work as a painter and joined the painters’ union.

For 14 years he worked as a painter in Yorkshire.

For 13 years he was a painter in London with the Penninsula and Oriental (P & O) Company : most of the ships of their line bore his handiwork. He worked on the Rome, The Victoria, The Oceana and the Arcadia. The elaborate ornamentation was largely Wilson’s work, done in enamelling – a distinct branch of the painter’s craft. 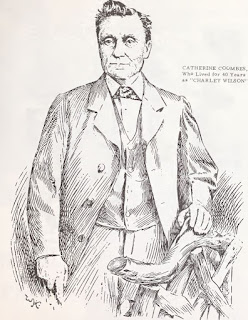 Wilson was stand-offish with regard to socialising with other men, and in particular avoided coarse and vulgar conversation. He owned a little house near the Victoria Docks, and for 22 years his niece kept house for him, being taken by the neighbours to be his wife.

In July 1896, at the age of 62, Wilson fell from a scaffold, and fractured his ribs. The attending doctor did not notice anything discrepant about his sex. However being unable to work, Wilson fell into destitution and was admitted to the West Ham workhouse. He was put in the male ward but, before the compulsory stripping, requested to see the matron and doctor, and stated: ‘I am a woman”, and then made a statement about her life.

Wilson told the Telegraph reporter that he felt very uncomfortable in the female workhouse uniform.