Prior to the June 2016 shootings at the Pulse nightclub in Orlando, Florida, the deadliest attack on gay people was the 24 June 1973 arson attack at the Up Stairs Lounge, 141 Chartres Street in the French Quarter of New Orleans. The prime suspect is a gay man who had been ejected from the bar earlier in the day. He was never charged and killed himself 17 months later.

On 24 June, the Metropolitan Community Church was having a social after its religious service on the final day of Pride Weekend. Just before 8PM the door buzzer from downstairs rang, and the door was opened revealing the stairs to be on fire, along with the smell of lighter fluid. The bartender led some 20 patrons out through the back entrance and to safety. However others were accidently locked in. 29 died, and another 18 were injured, of whom three later died.

Among the dead was Reginald Adams, an Afro-American from Dallas who had been studying at Loyola University in New Orleans, initially with the aim of becoming a Jesuit priest. At the Up Stairs lounge he had met the still young Ricky Soleto, who did drag acts, and was trying out some feminine personae. They became a couple, one of the few inter-racial gay couples in New Orleans at that time. The ambition to become a priest was being abandoned.

It was Reginald who suggested that Ricky become Regina, not so much from his name, but because she was his queen, which is what ‘Regina’ means. He started to wear Ricky’s high-school ring, and they shared an apartment in the French Quarter.

Regina and Reginald were both at the Up Stairs social on the fatal night. They realized that they did not have enough money for a dinner arrangement afterwards, and, having finished her drink, it was Regina who went home to get some, and also a borrowed hat to be returned. As she returned she saw the flames and fire engines were arriving. She could not find Reginald, and searched at Charity Hospital, where the victims were taken, but without success.

She was in shock. She continued to lay out Reginald’s clothes each day, even after her mother moved in to take care of her. Reginald was one of the last to be identified, being burnt beyond recognition. He was finally identified by dental records and by the high-school ring on his finger.

After her recovery, Regina became well known performer in New Orleans, first as a drag performer, and then as a woman. In 1980 Regina legally changed her name to Regina Adams, honoring the man who should have been her husband. 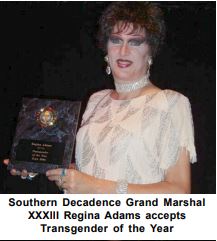 Because of Hurricane Katrina, there was no Southern Decadence in 2005. Therefore joint Grand Marshalls Lisa Beaumann and Regina Adams reigned in both 2005 and 2006.
Celebrazzi 2006