Lois Jean Gill was raised in Pittsburgh, and was first arrested at age 18. By the late 1950s Gill was an accomplished horse-rider, was working as a blacksmith.

From 1963 Gill worked as a prostitute, and was arrested for it the next year. Otherwise Gill was a retailer, running a baby furniture shop and a frozen foods store. By 1968 Gill was giving his name as Dante, and explained that he was a man.

He became involved with George Lee, the Pittsburgh mobster involved with pornography and prostitution. Gill’s mother Agnes died in 1973 after a struggle with cancer. Afterwards Gill became manager of one of Lee’s massage parlors (where sexual services were available). Here Gill learned the sex business: how to deal with johns and vice cops, how to run a legitimate cover business. 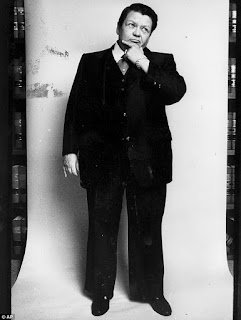 George Lee was gunned down in 1977, which set off a battle for his assets. Nick DeLucia, a former fireman, took several of the parlors, and for a while Gill was his business partner. However not without a struggle: one employee was murdered at home; a parlor was destroyed by a package bomb received at Christmas and one sex worker was killed. Amidst this, Dante found the time to marry Cynthia from Texas on a vacation in Hawai’i. They lived together in Pittsburgh, although the marriage did not last.

In November, the gay bar in Tampa, Florida run by an associate, Frank Cocchiara, burned down. Gill gave him a job running one of the parlors in Pittsburgh. Cocchiara became a regular at Pittsburgh’s drag balls, befriended local gay activist Herb Beatty and was one of the first to become HIV+.

In 1980 an arson attack destroyed one of Gill’s parlors, killing three men who were sleeping on the top floor. The partnership between DeLucia and Gill had degenerated to antagonism. DeLucia and some associates were even charged with an alleged plot to kill Gill (although due to a key witness’ attempt to extort money from the defense, nothing was ever proven in court).

Dante was tough enough to hold on. He got both his adversaries and the police to refer to him as Mr Gill. He expanded into gay bars, and into supplying anabolic steroids. He dressed expensively, traveled the world and collected rare animals. He was known for reciting Irish poetry.


DeLucia was jailed for tax evasion in 1981. Then Gill attempted to re-introduce Lee’s old monopoly by chasing the competition out of town. However he claimed to earn only $60,000 for income tax purposes, but the tax authorities were able to demonstrate that he was spending much more than that. They also found that each of his parlors brought in more than $500,000 each year.

In 1984 he was arrested, convicted and jailed for tax evasion. He was sentenced to 7 years, but paroled in 1987. The tax authorities filed a $12.5 million claim against him. However he no longer had much money.

Also he required dialysis. He died in hospital aged 72.