Kiernan started life as Kenneth R Wright in Dublin, and a few years later moved to Leeds outside Birmingham, Alabama, with his mother, Susan Ramsey Cleveland.

Susan, an avid reader, introduced Wright to Edgar Allen Poe and Bram Stoker. Wright also became strongly interested in paleontology, and as a teenager, volunteered at the Red Mountain Museum where fossils of Cretaceous mosasaurs, extinct seagoing reptiles, could be seen in the rock. Wright also spent several summers on archaeological and paleontological digs.

By 1992 Wright had transitioned, and was using the name Caitlin R Kiernan. She wrote her first novel, The Five of Cups, but it was not published until a decade later. Caitlin continued to be published in paleontology journals using her new name.

Her 1995 short story “Persephone” was nominated for the Bram Stoker Award by the Horror Writers of America, and led to Neil Gaiman and the editors of DC/Vertigo Comics asking her to write The Dreaming, an anthology comic book spun off from Gaiman's popular Sandman, featuring both existing supporting characters from Gaiman's title and new ones of Kiernan's own creation. 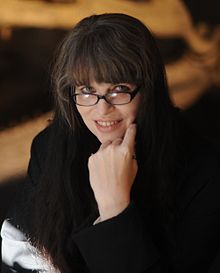 Her first published novel, Silk, came out in 1998. It was nominated for the Bram Stoker Award and British Fantasy Award and won the International Horror Guild Award for Best First Novel. More novels, short stories and comics followed. Her most acclaimed novel to date is The Drowning Girl: A Memoir, published in 2012 and set in Providence, Rhode Island.

Like HP Lovecraft, a major influence, Caitlin lives in Providence with her wife. She describes herself as an atheist pagan.

Of the people whom I have featured in this encyclopedia, Caitlin is one of the few listed as a notable in the Wikipedia article on her home town.