By some accounts trans history in Canada starts in 1962 when Jackie Shane was doing her gender ambiguous act at Toronto's Sapphire Tavern; legal secretary Dianna Boileau was arrested and outed after her best friend was killed in a car accident; Marie-Marcelle Godbout arrived in Montréal to start living as female; and  the Soeurs-du-Sacré-Coeur pushed the police to charge trans entertainer Lana St-Cyr with giving an indecent performance.

However, eight years earlier in August 1954, a trans woman became the third North American to seek surgery in Copenhagen.   In the footsteps of Christine Jorgensen and Charlotte McLeod she arrived in Denmark.  As had Charlotte McLeod a year earlier she found that the Folketing had passed a new law restricting sex-change operations to Danish nationals.   She self-castrated in her hotel room, forcing the medical authorities to step in.

We do not know her name, or what happened to her afterwards, either in Denmark or in Canada. 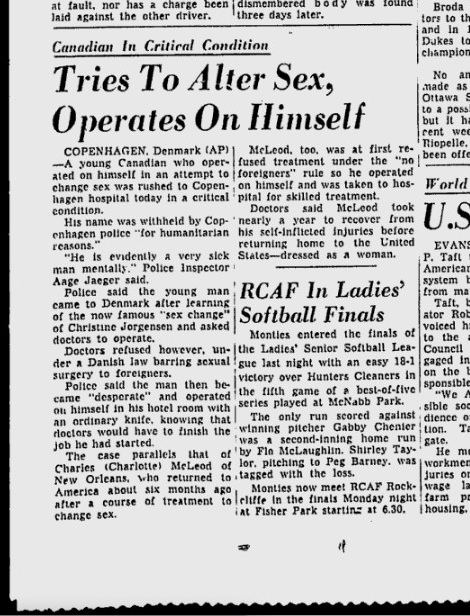 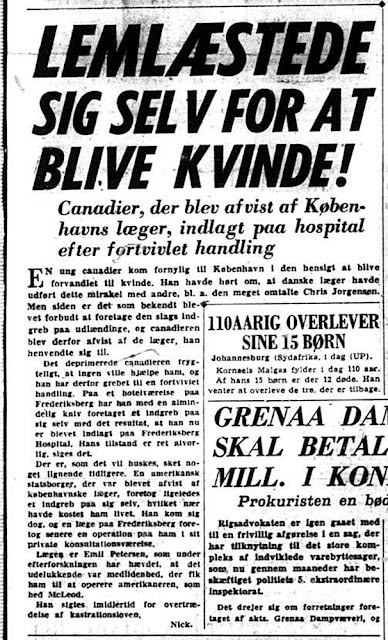 MUTILATED HIMSELF TO BE A WOMAN!

A young Canadian came to Copenhagen recently for the purpose of being transformed into a woman. He had heard that Danish doctors had done this miracle with others, among them the often mentioned Chris Jorgensen.But since then it has been forbidden to do this kind of operation on foreigners, and the Canadian was therefore rejected by the doctors he addressed.
It depressed the Canadian terribly that no-one would help him, and he has therefore performed a desperate act. In a hotel room in Frederiksberg he operated on himself with a regular knife with the result that he has now been hospitalized at Frederiksberg Hospital. His condition is quite critical, it is said.
There is, as will be remembered, something similar in the past. An American citizen, who had been rejected by Copenhagen doctors, also took an intervention on himself, which almost cost him his life. He got up, and a doctor in Frederiksberg later made an operation on him in his private consultation room.The doctor is Emil Petersen, who during the investigation has claimed that it was only compassion that caused him to operate the American, known as McLeod.He is, however, charged with violation of the Castration Act.
Nick

Email ThisBlogThis!Share to TwitterShare to FacebookShare to Pinterest
Labels: went to Denmark