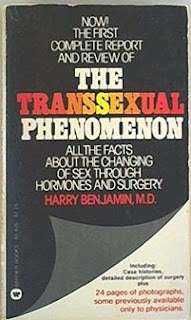 Wheeler & Schaefer use pseudonyms to refer to 8 of the 10 patients. However most of the patients are now discussed in trans histories either under different pseudonyms or by their real (ie. post-transition) name. In their revision for Ettner’s book, they used quite different names in some cases. These are marked CGD. Names used in Benjamin’s The Transsexual Phenomenon are marked HBTP. The usage in How Sex Changed by Joanne Meyerowitz is marked JMHSC, and that of Susan Stryker’s Transgender History as SSTH.

Actually Benjamin’s first trans case was Charlotte Charlaque in the mid-1920s. Apparently Benjamin simply suggested that she go to Magnus Hirschfeld in Berlin, which she did. She was half-German. Presumably Benjamin never started a file on her, and later, in the 1950s, when asked about her was unable to remember. The lack of a file meant that Wheeler and Schaefer did not know about her.
Otto, whom Benjamin regarded as a Type II Fetishistic Transvestite, made a hobby of meeting sexologists and being mentioned, but not always named, in their publications. He met Magnus Hirschfeld, and was described in Bernard Talmey’s 1913 article "Transvestism: A contribution to the study of the psychology of sex", where he is referred to “Mr S” and “First patient". George W. Henry, in his Sex Variants, 1948, also discusses Otto, but under the name of Rudolph von H. HBTP discusses Otto anonymously on p51/23, but mentions that Talmey had described the case, which permits identification. JMHSC and both versions of Wheeler and Schaefer use the name Otto Spengler.
Sally was Benjamin’s first case that he helped through to surgery. She was discovered by Alfred Kinsey who referred her to Benjamin. In HBTP Sally is discussed anonymously p106-7/49 and in detail p299-307/141-2 where she is referred to as “H.”. Wheeler & Schaefer refer to her as Barry (as a forename) and then as Sally. JMHSC refers to her as Val Barry (Barry as a surname). SSTH denies her the dignity of a name and refers to her as the “mayhem” case (referring to a legal provision that prevented surgery in the US). In CGD she is called Van for the male phase and Susan afterwards.
Real name Barbara Ann Richards, and then Mrs Barbara Wilcox. JMHSC refers to her by both these names; Richard Doctor’s biography of Virginia Prince simply calls her Barbara Ann Wilcox. In CGD she is renamed to Barbara. She was an early pioneer who petitioned the Superior Court of California to change her name and legal gender - in 1941!!
Real name Lauren Wilcox. Barbara’s spouse: first wife and then husband. Barbara took the media spotlight, and Lauren transitioned quietly. JMHSC refers to him as Lauren Wilcox. In CGD he also became Lauren.
This person’s real name was Louise Lawrence. She published under the pseudonym of Janet Thompson. She is surprisingly not mentioned, except as the writer Janet Thompson, in HBTP, despite all the work that she and Benjamin had done together. Wheeler & Schaefer call her Doris. JMHSC and SSTH refer to her by her real name. CGD calls her Louise.   April Ashley calls her Louise.
Frank saw Benjamin in 1951 at age 35. Two years later Benjamin referred him to Albert Ellis, and did not see him again until 1972. “after 20 years of vacillating, I am no longer interested at all in a sex-change”. In CGD he is referred to as Emory.
Everybody calls her Christine Jorgensen.
Christine Jorgensen's first referral to Benjamin. Harold saw Benjamin on only three separate occasions, over a period of 26 years, 1953-70. It is not known if Harold ever did transition.
This seems to be Clara Miller, one of the autobiographies in the appendix to HBTP by REL Masters, and called C in the Biographical Profiles. In CGD she is renamed Vera.

This person appears in HBTP paperback as the last four photographs, and is discussed anonymously p137/63. She is sometimes referred to as the tattoo woman because Benjamin did not give her a name. CGD renames her as Claire.
Time: 14:14