Adélaîde Herculine Barbin was born in Saint-Jean-d’Angely in Charente-Maritime. Her family usually referred to her as Alexina.  Her father died when she was young, which resulted in her being raised in an almost exclusively female and strongly religious environment.

Alexina was chosen for a charity scholarship to study at the school of an Ursaline convent. In 1856 she was sent for teacher training. Afterwards she became an assistant teacher in a girls’ school, where she had an affair with a fellow teacher, Sara.

Abdominal pain and religious guilt led Alexina to a confession with the bishop, and with her permission to break confessional silence, he sent for a doctor to examine her. The doctor found that she had a small penis and testicles inside her vagina, had never menstruated or developed breasts, and shaved facial hair.

In 1860 a tribunal heard evidence from Dr Chestnet of La Rochelle. As a result the register of Barbin’s birth was changed: the sex to male, and the name to Abel. It was deemed that Barbin had always been male. The next Sunday, Abel Barbin, dressed as a man appeared at the church of Saint-Jean between his mother and one of the town’s most respectable ladies.

This did not mean that Abel could marry Sara. The scandal was great and they were kept apart. A family connection secured for Barbin a position of clerk to a Paris railway company. Dr Chestner wrote up the case for the Annales d’hygiène publique et de médecine légale.

Abel committed suicide at the age of 30 by inhaling from his gas stove in his room in the rue de l'École-de-Médecine in Paris. The police doctor, who had been called, examined the dead man’s genitals expecting to find that he was a syphilitic - a common cause of suicide at that time - but finding something quite different. Word spread quickly, and Dr E Goujon at the Faculity of Medicine acted quickly so that the body would not be lost to science. He performed an autopsy and took careful notes, including two detailed drawings of Barbin’s genital area.

In addition Barbin had left memoirs, in which the male persona is referred at as Camille. They were given to Auguste Ambroise Tardieu who published excerpts in his Question médico-légale de l'identité, 1872.

In 1893 the German psychiatrist and novelist Oskar Panizza, wrote a fictionalized version of Alexina/Camille as Ein skandalöser Fall: Geschichten, which is obviously taken from the account in Tardieu but set in the eighteenth century. 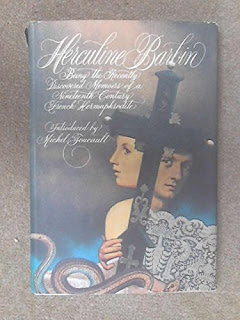 In 1908 Neugebauer summarized Camille’s story in his immense inventory of hermaphroditism. Either by his doing, or as a printer’s error, Barbin’s name was affixed to the image of somebody else.

After that interest in Barbin dissipated until, in the late 1970s, the memoirs were discovered in the archives of le département français de l'Hygiène Publique, and were published by the controversial academic Michel Foucault.

The story was filmed in 1985 as Mystere Alexina. To the plot from the book, the filmmakers added an intrigue of being secretive about the gender of the actor who played Alexina: Philippe Vuillemin, a comic book artist, was billed as Vuillemin only.

Dr Goujon left us two detailed drawing of Barbin’s genital area, but we have no record of her face.  The drawings may be viewed in Dreger’s book.

The EN.Wikipedia article, in line with its usual practice, retrojects final gender back to birth.  “It's wikipedia policy to use the gender that the person decided upon as the pronoun throughout, not alternate them”.  However it gives not the slightest evidence that Barbin chose to be male, or even accepted the gender reassignment.  Suicide was her method of refusing to be male.  Even stranger, having imposed male pronouns, it names the article with Camille’s birth girl name: “Herculine Barbin”.

Actually the birth name was Adélaîde Herculine Barbin, so if only one first name is given, it should be Adélaîde Barbin.  However it would be better to refer to Alexina, as this is what family and friends called her.  This is one case where the film got it more right than most of the books about this person.

Likewise Abel is a name imposed.  When Alexina uses a male name for herself, she uses Camille.  I have used Camille in the name of this article in that it is the last name that Barbin used for herself.

If Barbin had been born earlier, s/he would have been determined to be a hermaphrodite, and permitted to choose a gender.  This freedom had been gradually reduced since the eighteenth century and by 1860 the church, the state and medicine in alliance took it upon themselves to determine the ‘true sex’ of a person, and compel them into it, without any consideration of the person’s feelings.

Previously to 1860, the major determinant in sexing a person had been presence or lack of a penis or vagina.  Barbin had both and should have been a hermaphrodite.  However the new fashion was that gonads determined sex.  Barbin had testes but no ovaries.  This criterion was the trump until chromosomes were discovered in the twentieth century.

As I have mentioned elsewhere, I am not a follower of Michel Foucault.  However I feel that his paragraph from page xiii is certainly worth pondering:


Alexina wrote her memoirs about that life once her new identity had been discovered and established. Her "true" and "definitive" identity. But it is clear she did not write them from the point of view of that sex which had at last been brought to light. It is not a man who is speaking, trying to recall his sensations and his life as they were at the time when he was not yet "himself." When Alexina composed her memoirs, she was not far from her suicide; for herself, she was still without a definite sex, but she was deprived of the delights she experienced in not having one, or in not entirely having the same sex as the girls among whom she lived and whom she loved and desired so much. And what she evokes in her past is the happy limbo of a non-identity, which was paradoxically protected by the life of those closed, narrow, and intimate societies where one has the strange happiness, which is at the same time obligatory and forbidden, of being acquainted with only one sex.