Edward Wilson from Leicestershire served under his uncle in Flanders during the Nine-years war against France, 1688-97. However he was dismissed and sent home to London with 10 guineas (about £2,300 in modern money). This was soon spent. However by 1693 Wilson was living with the equipage and garb of nobility, had redeemed his father’s estate and gave portions to his sister – all this without any visible means of income. It was estimated that he was living at a rate of £4,000 per annum (over three quarters of £1 million in modern money). There was much speculation in the coffee-houses and in clubs as to the source of his income. Had he stolen diamonds, was he passing information to the French, had he discovered the philosopher’s stone, or sold his soul to the devil? Was he a kept man?

There was only one lady who was said to have enough resources, the intrigante Mistress Elizabeth Villiers (1657-1733) then 36 and the favourite of the then King, William of Orange. It was later said that Wilson and Villiers had been lovers and she was curious to know of a rival. In any case it irked her that she was being mentioned. She engaged one John Law, a card sharper down from Edinburgh to spy on Wilson. He quickly ascertained that most evenings at around 10, Wilson would dismiss his servants and take a sedan chair to a house near Hyde Park Corner. He did not return until 5am. On a later evening Law realised that the house went through to the next street, and a hour after Wilson's arrival a lady left by chair from the back door and proceeded to a nobleman’s house. Some hours later she emerged and the journey was reversed. After some days of watching this, Law contrived to have the lady arrested and taken to a sponging house on charges of an outstanding debt. There he was able to confirm that the lady was Wilson, and was impressed by her gait and demeanour which were consistent with her appearance. Wilson offered money and Law changed sides. It was arranged that Law should burst into the nobleman’s house and discover Wilson with the naked daughter of the French steward. This was reported back to Mistress Villiers.

It so happened that both Wilson’s sister and Law’s mistress, a Mrs Lawrence, lodged at the same abode in St Giles in the Fields. After a spat between the two, Wilson removed his sister elsewhere. Law took the attitude that aspersions had thereby been cast upon the residence, and letters concerning matters of honour were exchanged. On the 9th April 1694, Wilson was drinking with a friend, Captain Wightman at the Fountain Inn in the Strand, when Law arrived and words were exchanged. Law then left. Wilson and Wightman took a carriage to Bloomsbury Square, where they encountered Law again. Law and Wilson drew swords, and after only one pass, Law punctured Wilson fatally to the depth of two inches in the upper part of the stomach. Law remained and was immediately arrested. Wightman went immediately to Wilson’s house, but reported that there were no papers, except for a suggested cure for toothache.

While their encounter did not have the formality of a duel (formal challenge, seconds, a surgeon in attendance etc), it is described so in many accounts. Duelling was illegal, but survivors of duels were almost never arraigned. Law was found guilty of murder on 20th April, sentenced to death. This was then commuted to a fine, but Wilson’s brother lodged an “appeal of murder”, a private prosecution following an acquittal for murder, and Law continued to be imprisoned. On the 6th January 1695 with the help of bribes and drugs to subdue the guards, law escaped to a waiting coach, which took him to a waiting ship and thence to Flanders. 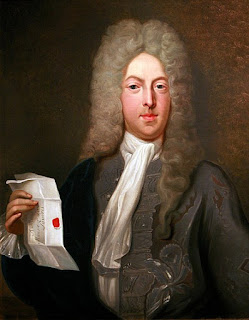 Prior to this period, much of what banking there was had been done by goldsmiths.  John Law (1671-1729) was the son of a Scottish goldsmith and was thus acquainted with the practices and the theory.  He was also good at numbers and odds and at remembering which cards had already been played, and thus was able to win at the game of faro.  After his prison escape he wandered around Europe, living by his wits and his abilities as a card sharper.  He also became an advocate for central banking and paper currency. He published a text entitled Money and Trade Considered: with a Proposal for Supplying the Nation with Money, 1705. Law was in Scotland and participated in the debates leading to the Act of Union with England, 1707. However with the passing of that act he had to leave as he was an escaped felon in England. His propositions of creating a national bank in Scotland were ultimately rejected. In France he was mentored by the Duke of Orleans. The wars of Louis XIV had left the country completely wasted, both economically and financially. The resultant shortage of precious metals led to a shortage of coins in circulation, which in turn limited the production of new coins. After Louis XIV died, and Orleans became regent, Law proposed that the economy be stimulated by replacing gold with paper credit and a centralised bank.  He was the architect of the Mississippi Company which became the Mississippi Bubble in 1720, and the bubble in turn was aggravated by an outbreak of plague in the Marseilles region. People quickly returned to gold and silver currency and there was no further monetary reform until after the Revolution. Law's properties were confiscated. He had been granted a British pardon in 1719, and returned to London in 1723. He died in poverty in Venice in 1729 age 57. 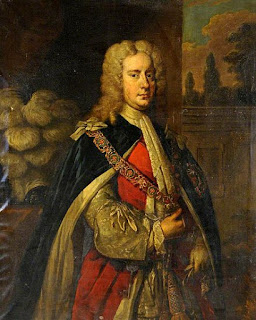 The nobleman lover of Edward Wilson is taken by most writers to be Charles Spencer (1675-1722). He became the heir to the Earldom of Sunderland when his elder brother died in 1688. After the death of Edward Wilson, he became Member of Parliament for Tiverton in 1695 and married the heiress Arabella Cavendish. She gave him one daughter and died in 1698 age 24. He married a second heiress, Anne Churchill in 1700. They had six children and she died in 1716 age 33. Spencer married a third heiress, Judith Tichborne in 1717. They had three children who all died very young. Spencer became the Third Earl in 1702, and he served in several major political offices. In 1718 he became First Lord of the Treasury (in effect Prime Minister). This was at the same time as John Law held the corresponding position in France. The British South Sea Bubble was also in 1720, and Spencer resigned over it in 1721. He died a year later. Love-Letters Between a Certain Late Nobleman and the Famous Mr. Wilson: Discovering the True History of the Rise and Surprising Grandeur of that Celebrated Beau which almost identified him as Edward Wilson’s lover was published a year after that.

Netta Murray Goldsmith points out that neither Spencer nor Villiers was that rich that they could provide for Wilson’s spending. Spencer was still dependent on an allowance from his father. She makes a good case that William of Orange was also Wilson’s lover. Two other attractive young men were raised by William III to wealth and titles: William Bentinck and Arnold van Keppel. All three were regarded as part of a sodomical circle at court.

The suspicious removal of all Wilson's papers, and the arranged escape of Law from prison suggest a conspiracy.  Law would seem to have been a hitman, but who ordered Wilson's death and why?  Had he become over-demanding, or an embarrassment? Had he suggested that he would spill secrets?

Some historians suggest that the 1723 published Love Letters were among the documents removed from Wilson's house when he was killed.  This detail, like most of the details here is advocated by some and dismissed by others.