Lundberg’s father was a union organizer, but despite this the parents rejected her gender expressions. However there was an accepting grandmother, and it was a friend of the grandmother who introduced the child to a video of the drag show After Dark with Christer Lindarw.

At the age of 15, Lundberg was able to start an acting career with a recurring small male part in the Swedish television series, Kenny Starfighter.

Lundberg first came out as gay, then that she felt like a girl, and finally that she wanted correction surgery.  However Aleksa did not really fit in with the other trans women.


“The difference between being transsexual and transvestite was important to point out. In no circumstances did I want to be taken to be like Birgitta or the other ladies. … In addition, I thought that the aunties at Gyllene Gåsen looked like boys in dress, which I myself was terrified to be perceived as. I was a girl born in the wrong body and otherwise normal. … It felt insanely sad not to order a large portion of meat. I had always loved luxurious steaks, clove potatoes and fatty sauces. But I had decided to appear as a woman in every conceivable part of my life.”

Transition was completed by 2002. In 2003 she was in the television miniseries, Veganspöket Lisa, but uncredited.

After 13 attempts she was accepted in 2006 to study drama at Teaterhögskolan, Göteborg. As she grew older she came to resent that Swedish law had prohibited her from freezing sperm before transition, and therefore from having children. She stopped hiding that she had been born male, and launched a one-woman show, Infestus, which told of her life as a boy, her transition, and life as a grown woman. She played this all over Sweden to acclaim. 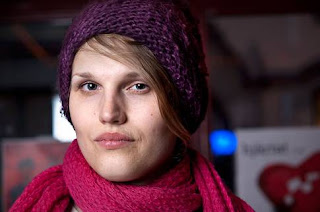 In 2009 she graduated in drama, the first known trans person to do so in Sweden. However she found that she was not able to obtain work with any of the institutional theatres.

By 2010, apart from the Christian Democrats, the main political parties supported repeal of the 1972 law which prohibited transsexuals from having children after surgery. In 2011 Aleksa played in a stage version of Ingmar Bergman's Hour of the Wolf.

The ban on freezing eggs or sperm was removed in 2013. Aleksa, and another 141 transsexuals claimed damages of 300.000 kronor each, but received neither damages nor an apology.

In 2014 she was cast in Jean Genet's The Maids, but after a few weeks of rehearsal realized that she could not play the transgender implications of the play. Then, in three days, she wrote Maids! The transgender version and premiered it at Stockholm's Theatre Three.

At that point she was insistent that she would never reveal her boy name, but, of course, as her first acting gig had been as a boy her name was available in IMDB.

In 2018 she published her autobiography, Bögtjejen (=gay girl). Here she first expressed some degree 
“I regret it. I'm not a woman. Never been”. although she quickly adds: "My temporary stage of regret passed so quickly".

As Collmer paraphrases: “She questions the image of herself - the simplified narrative of being born in the wrong body, and she questions the value of being normal. She puts words on the internalized transphobia that requires her to be exaggerated and purely feminine, and instead tries to embrace that she also has masculine sides. Gradually, she seems to stop looking for something that already exists, and instead start looking for opportunities to change attitudes at the community level. She goes from wanting to fit in to wanting to change.”

In October 2019 Aleksa apologised for not having been sufficiently open about the depression she had felt after her operation.


“I would probably not undergo corrective surgery if I had the same choice today,” she wrote. “And I want to apologise to those who perhaps needed to hear that story earlier.”

Genet’s The Maids need not be cast for male or trans actors. The 1974 film version featured Glenda Jackson and Susannah York as the maids, and the 2013 Sydney Theatre Company version starred Cate Blanchette and Isabelle Huppert.
Time: 12:54