Lynne Irene Benton had been a cop in the small town of Gladstone, south of Portland, Oregon, and nearby towns since 1987. She had become a detective in 1993, the same year that she married a Brazilian man to help him acquire US citizenship (they divorced a few years later).

By 2008 Benton was a sergeant, the Public Information Officer for the Gladstone force, and taught at the local community college. She had been in a registered domestic relationship with a woman, and was working towards transition, although still presenting as female in both jobs. Benton had changed his name to Lynn Edward Benton, and been able to change his name on his driving license.

In June 2008 Benton was the local cop summoned when Neil Beagley was found dead. While eventually Neil’s parents, who belonged to the Followers of Christ Church, would be convicted of criminally negligent homicide in denying medical care to their 16-year-old son, initially it was the duty of Benton to announce that the son himself had declined medical attention (Oregon law allows those 14 and older to make such decisions).

During the Beagley trial in March 2010, Sergeant Benton was not called as a witness, despite being the first cop at the death scene. The lawyers did not want to confuse the jurors with Benton’s personal situation. Police Public Information Officers are often promoted to police chief, but Benton had been passed over when the former chief retired.

Benton had broken up with his domestic partner of nine years, and had taken up with Debbie Higbee, who owned a beauty parlor in Gladstone. They were married in July 2010.

Debbie considered that Lynn was becoming angrier and meaner, and attributed it to his taking testosterone. By the following May, Debbie was about to report him for domestic violence, which would have damaged his career.

Benton offered $2000 to a friend, Susan Campbell, and her son Jason Jaynes, to kill his wife. They shot, beat and then strangled her. Campbell said too much revealing what she knew of the murder, and was arrested. Jaynes was arrested on charges of sex with underage girls and imprisoned for 15 years, where he admitted to another inmate that he had helped his mother do the killing.

Benton was first placed on administrative leave, but then fired in December when pornography was found on his laptop, and because of the 1993 sham marriage – it was also said that he had not filed charges against Jayne for sex with underage girls. He became a Greyhound Bus driver. 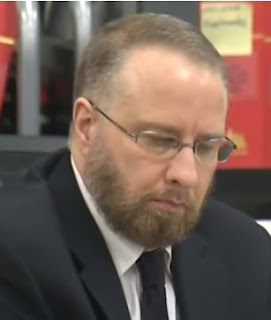 In 2016 Irene Berg, the mother of Debbie Higbee, filed a $900,000 wrongful death lawsuit against Lynn Benton.

At the trial in 2017, Susan Campbell, whose grand jury testimony had secured the indictment, declined to testify, despite her plea deal for a reduced sentence. Despite this Lynn Edward Benton was found guilty of arranging the murder of his wife in 2011. He was sentenced to life without parole.

Benton is currently registered with the Oregon Department of Corrections as female and is in Oregon’s only women’s prison at Coffee Creek. (The facility also processes all new inmates, male and female. There are usually about 400 men at the facility. There are also six trans inmates there.)


How far transitioned was Benton at the time of the 2010 marriage or the murder?   Stauth's book and the newspaper articles are not in agreement.  Certainly their is no mention of a doctor or clinic facilitating  transition, although he obviously has been taking male hormones.

Campbell and Jaynes apparently never did get the $2,000.