Frank Devera Jackson was born in Montgomery, Alabama,. He and his sister were orphaned. They were then raised by a widowed aunt in Kansas City, Missouri. At age 19, the aunt died, and the rest of the family moved to Chicago.

From age 15 Frankie Jaxon, as he became, toured as a singer and as such joined the Henry McDaniel Minstrel Show. He worked in medicine shows in Texas and then worked regularly in Atlantic City and Chicago. He did a stint in the army 1918-19, and was promoted to sergeant before being honorably discharged.

Within months he was starring; he sang, danced, and performed as a female impersonator in Atlantic City. He returned to his family in Bronzeville (more), Chicago’s  African-American district, which he made his home base. He supplemented successful home-town shows with short tours by small companies of black performers. In 1925 he joined Mae Dix (1895 – 1958) and her Chicago Harmonaders. He was the only black and the only known queer man in the troupe. When they played in southern US states, he had to be escorted to and from the theater and whenever he needed to leave the hotel. Despite this he won rave reviews. This publicity translated into major bookings in Chicago. His appearance at the faltering Grande Theater on South Slate Street is said to have saved the owners from bankruptcy.

He was known as “Half-Pint” because he was only 5’2” (1.57m). At the same time he was a jazz singer appearing with King Oliver, Tampa Red and Thomas Dorsey. He had a small part in the Duke Ellington film, Black and Tan, and in King Vidor’s Hallelujah, both 1929. He had been signed to play a female role in The Mortage Man as a target of an unscrupulous banker – but the film was never made in the aftermath of the Wall Street Crash. 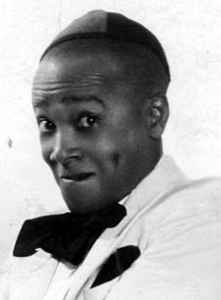 The Pansy Craze 1930-1933 suited his act perfectly, but it ceased to be acceptable after Prohibition was repealed in 1933. Jaxon however was on the bill for the opening ceremonies of the Chicago World Fair 27 May 1933.

Through the 30s, he was often on radio with his band, the Quarts of Joy. The shows included bawdy humor, and Jaxon often played the women’s roles in the songs – usually about sexual topics. He had a convincing female voice. It was these radio appearances that made him a household name. Some of his songs were originals, but others were cover versions with more risqué lyrics – such as “My Daddy Rocks Me with One Steady Roll”, previously recorded by Trixie Smith. Jaxon’s last recording was “be Your Natural Self” in April 1940. This was just after the Chicago Defender had repeated rumors insinuating that the Rev Clarence Cobbs was gay, and Cobbs had sued for libel. The song warns [gay men] to "Watch your step" and "Be careful what you say”. Yet despite being cautious, they should still be "your natural self".

Shortly afterwards he walked away from his show-biz career. In the spring of 1941 he moved to Washington, DC. He found government work, some say for the Pentagon.

Unfortunately we have no photographs of Frankie in drag.

Some say that Jaxon’s version of “My Daddy Rocks Me with One Steady Roll” gave its name to the genre Rock and Roll which emerged over a decade later. Anyway it is the first known recording to include an orgasm.

Henry McDaniel Minstrel Show was not black-face minstrelsy. The troupe were real black people. I was unable to find an account of Henry McDaniel to link to. He was a remarkable man, born a slave, fought in the US Civil War, a Baptist minister, a carpenter, banjo player and ran his own minstrel troupe. His is remembered today only as the father of Hattie McDaniel, the first black actor to win an Oscar.

Did Jaxon have a wife? A census taker visited 5149 Calmut Avenue and Evelyn, a white woman, listed herself as Jaxon’s wife. They also had two lodgers: a white woman and a black man. In 1933, the Chicago Defender announced that “Mr. and Mrs. Frankie (Half Pint) Jaxon are expecting a blessed event”. Jim Elledge searched marriage and birth records in Illinois, New York and New Jersey and failed to find any confirmation at all. He suggests that there was a male couple and a female couple living at 5149 Calmut Avenue - and that all the rest was camouflage. In which case we can name Frankie’s husband as Cliff Oliver. Neither Evelyn nor Clifford, nor any child accompanied Frankie to Washington in 1942.