Karl Giese was raised by a working-class family in Berlin, in the Wedding district, close to where the Leopoldplatz U-Bahn station was opened in 1923. He was a student when in 1918 he attended a lecture by Magnus Hirschfeld and recognised his own homosexuality. He was active in theatre and performed with the Theater der Eigenen, which led to a part in the pioneering pro-gay film Anders als die Andern, where he met Hirschfeld again. Hirschfeld opened the Institut für Sexualwissenschaft that year, and employed Giese at first as a secretary and general assistant. Later he was put in charge of the collections, the archives and the library. At some point they became a couple. Charlotte Wolfe, Hirschfeld's biographer, comments of Hirschfeld:

“The fact that he himself broke the barrier of secrecy through the openness of his love for his secretary, Karl Giese. was as much a turning point in his life as the realization of his dream — the creation of the Institute for Sexual Science. The one might not have succeeded so well without the other. (p185)”

Giese took initiatives in decorating, enjoyed needlework and managed Hirschfeld’s wardrobe. He occasionally did drag for a social. He conducted tours of the Institut and gave lectures. Wolfe comments re Giese:

“Giese was no academic, but he had native wit and considerable intelligence. He had been a brilliant autodidact. He was also an articulate speaker, and Hirschfeld entrusted him with lecturing to the general public on questions of sexual conﬂict and homosexuality. He fulﬁlled his many tasks with enthusiasm, and at the same time cared for Hirschfeld's well-being like a mother. (p185)”

Giese wrote reviews of gay novels and studied the Danish fairy tale writer Hans Christian Andersen. In September 1929 he accompanied Hirschfeld and his translator Charlotte Charlaque to the Third International Congress of the World League for Sexual Reform (WLSR) in London.

In November 1929 the English writer Christopher Isherwood became a paying guest in the Institut. He and Karl flirted with each other. Isherwood commented:

“As the short winter afternoon began to darken, they would visit Karl Giese for coffee and gossip. The atmosphere of Karl’s sitting room had none of the Institute’s noble seriousness; it was a cozy little nest, lined with photographs and souvenirs. In repose, Karl’s long handsome face was melancholy. But soon he would be giggling and rolling his eyes. Touching the back of his head with his fingertips, as if patting bobbed curls, he would strike an It-Girl pose. This dedicated, earnest, intelligent campaigner for sexual freedom had an extraordinary innocence at such moments. Christopher saw in him the sturdy peasant youth with a girl’s heart who, long ago, had fallen in love with Hirschfeld, his father image Karl still referred to Hirschfeld as ‘Papa’.”

By 1930 Giese had become involved in marriage counselling for trans persons, and wrote a paper on the topic for Die Aufklärung, in which he discouraged marriages especially for ‘homosexual transvestites’.

When Magnus Hirschfeld left on his world tour in December1930, he appointed Giese as his trustee and advocate. In March 1932 Hirschfeld arrived in Athens from Beirut on his way back. He was there met by Giese who warned him that he would not be safe if he returned to Berlin. And he met Hirschfeld’s new lover Tao Li, whom he got on with. After a brief time together, Giese returned to Berlin to run the Institut, and the other two went to Zurich. In September he and Hirschfeld went to the Fifth and last Congress of the World League for Sexual Reform (WLSR) in Brno co-organised by Dr Josef Weisskopf (1904-1977).

Giese was a witness of the Nazi looting of the Institut, 6 May 1933, and left for Switzerland the next day, where he met with Hirschfeld and Tao Li in the resort town of Ascona. They lived for a few month as a ménage à trois. In August Giese was sent to Brno to discuss the possibility of a new Institut there with Josef Weisskopf. However the answer was negative. Giese was able to work with the Brno lawyer Karl Fein (1894-1942) to buy back part of the archives etc from the Institut that had not been burned in the public bonfire 10 May 1933. Giese arranged that the materials - about 2500 kg - were transported to Paris, where they were stored in a warehouse but later lost. By then Hirschfeld and Tao Li were in Paris, and Giese joined them. However in spring 1934 Giese was arrested for the wrong kind of sex in a public bathhouse, and sentenced to three months. As a result his residence permit was not renewed and he was forced to leave France at the end of October, He went to Vienna and for a while was a student (Norman Haire and Hirschfeld were paying his fees). When Hirschfeld died 14 May 1935 in Nice, Giese illegally re-entered France and gave a speech at the funeral.

In June 1936 he returned to Brno, initially - for a few months - living with Karl Fein, but then found his own flat. While his inheritance from Hirschfeld contained conditions about restoring the Archives, he was able to live comfortably without finding a job. He was in touch with Charlotte Charlaque and Toni Ebel when they were in Brno. He was reading English-language literature, and attending the theatre. He may have been taking English lessons from Charlotte. However he was depressed and after the Nazi annexation of Austria he took his own life on 16 March 1938, at the age of 39. 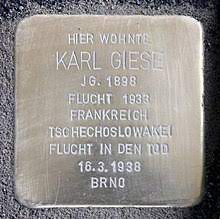 All that he had was inherited by Karl Fein, who was arrested by the Gestapo in August 1942 and died in the Terezin concentration camp February 1943.